Toponym
Aigion, Vostitsa
Linked Record
2008
Report
Aigion, 26 Panagiotopoulou Street (property of A. Poulou). Andreas Vordos (ΣΤ’ΕΠΚΑ) reports on the discovery of architectural remains of the Hellenistic and Roman periods (Fig. 1). The foundation of 17 walls were identified which form at least three rooms. The walls were constructed using rough or partially shaped stones, along with tile fragments. The most substantial of all the walls (5.63x0.50x0.67 m.) continued in adjacent properties and many showed signs of repair. At the northern corner of two walls was part of closed Roman pipe of 1.63 m. in length, part of a floor made of clay slabs and mortar, along with a clay sink which was built within a rectangular construction with a pebble floor (Fig. 2). In the western part of the property was the lower part of a circular ceramic kiln of 1.50 m. in diameter and internally lined with plaster. Another two sinks made of mortar were also found, while in the northern part of the property was excavated a circular pit of 1.20 m. in diameter, from which Hellenistic pottery sherds were collected. Additional finds included Hellenistic and Roman pottery, loom-weights, lamps, iron nails and seven bronze coins. 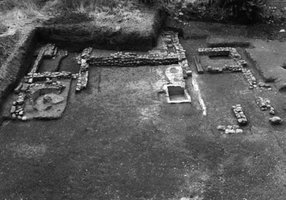 Fig. 1/ View of the excavations from the north 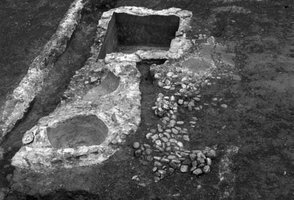