Key-words
Residence - Figurine - Hearth/Kiln/Oven - Numismatics - Domestic space - Building Type - Find Type - Site Type
Type of Operation
Excavation - Research excavation
Institution
École française d'Athènes
Société archéologique d'Athènes
Toponym
Dikili Tash
Linked Record
1987198819891989 (1)1991199319941995199620052006200820092010201120122013201420152016201720182019
Report
Dikili Tash. P. Darcque (EfA/CNRS), Ch. Koukouli-Chrysanthaki (ASA), D. Malamidou (ΙΗ' ΕΠΚΑ) and Z. Tsirtsoni (CNRS/EfA) report on the first season of a 3rd programme of collaborative excavation, which aims to bring together information enabling reconstruction of the birth of the tell in the Neo period and its evolution into mod. times. During this first campaign, research was confined to 3 sectors where new findings could be obtained to answer the main research questions posed (Fig. 1).
At the foot of the S slope of the tell, a first intervention aimed to trace the possible limit of the PH settlement. Under the hillwash, stones appeared in the S part of the trench, mixed with LNeo and EBA sherds and bones: these look more like a mass of fallen rocks than a continuation of the weathering discovered during the 2nd programme of excavation. It is possible that the preserved limits of the tell lie here. Part of a Neo vase decorated with an applied anthropomorphic figure was discovered in this sector (Fig. 2).
In sector 6, it was hoped to reveal the continuation of house 1 (LNeo II) as well as levels of the LNeo−EBA transition. Apart from the unexpected discovery of a silver tetradrachm of Alexander III (struck in the royal mint of Amphipolis between 315−294 BC), the continuation of house 1 appeared in the location expected, covered by a thick destruction layer, recognizable from the colour of the burnt daub. This lay under the EBA level which produced a hearth as well as silos, the walls of which were covered with a white coating. In the SW of the excavated area, lying on a hearth, was an intact, two-headed zoomorphic figurine, ca. 0.2m l. (Fig. 3). The type is rare both at Dikili Tash and in the Aegean world in general, and the discovery of such an item in situ is exceptional.
In sector 7, close to the top of the tell, the main objective was to explore the possible successor to a LBA house discovered in this area. But before reaching this house, excavation in sector 7 exposed a sequence of occupation levels of this period which produced abundant finds: several bronze objects, including the complete blade of a small dagger, and a fragment of a cup with painted decoration imitating a Myc type (the first discovered at Dikili Tash). LBA occupation was thus not a short episode in the life of the PH settlement, but had several phases, lending it a rather different historical significance than hitherto recognized.
Author
Catherine MORGAN
Bibliographic reference(s)
Unpublished field report, École française d'Athènes Also: P. Darcque, H. Koukouli-Chryssanthaki, D. Malamidou, Zoi Tsirtsoni, Dikili Tash, BCH 133.2 (2009), p. 529-541.
Date of creation
2010-03-10 00:00:00
Last modification
2018-09-28 09:13:17
Picture(s) 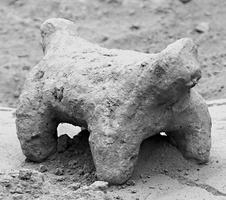