Frankish Area: Excavations, resumed in 2014, continued in the Frankish Area in preparation for completion of the conservation and consolidation program (Fig. 1). The goal was to excavate beneath the floors of Unit 2 in order to establish an objective date for the Church’s construction and for the addition of rooms both N and S of the original building.

In the corridor N of the church a series of construction floors reflect the re-deposition of debris after the foundations of the church were opened and built and before final plastering. A glazed, incised rim sherd in the foundation trench dates to the mid to 3rd quarter of the 13th c. AD. Pottery and coins minted for William Villehardouin (1246-78) before AD 1267 date the completion of the church soon after the foundations were laid. Clearing debris still on the floor of the narthex revealed a vault voussoir painted with the face of an archangel (Fig. 2). A similar date for the construction of the room immediately to the west is given by pottery in the construction floors under the floor of Room 2.

In Room 9, removal of the floor of this later addition revealed a large pit filled with pottery of the last quarter of the 13th c. AD and quantities of royal French deniers tournois imported in or after the Treaty of Viterbo in AD 1267. The pit cut and partially filled a large built pit built early in the 13th century and used as a latrine. Pottery at the top of the latrine indicates that it went out of use shortly before the construction of the church. Contexts of late 13th c. under the floors of rooms 10 and 11 confirm that these three rooms were all built ca. 1300. The pottery includes relatively small quantities of Protomaiolica suggesting that the first imports of these Italian imports also followed the Treaty of Viterbo.

Fill dating to the third quarter of the 13th century under the floor of Room 3 also ran under its S and W wall (Fig. 3). Into this fill were dug storage pits filled with early 14th century pottery during the time when the room was originally occupied. The space was unified with the room to the N by removal of the entire party wall. A large pit cut through the tile floor of the N room and through about two thirds of the original earth floor of the S room. Its fill contained later 14th century pottery.

Further excavations have revealed that the two main units of the Frankish Area were built late in the third quarter of the 13th century. Unit 1 was expanded ca. AD 1300. Further consideration of finds from the previous campaign ending in 1997 indicate that the spaces remained standing until the early 15th century rather than to AD 1320 as previously thought. This year’s work has been important for dating medieval pottery of the period but more important is that we can now propose a logical sequence for the four main types of petty coin in circulation. Byzantine style coins were demonetized ca. AD 1225 and their successor type were replaced by French coins ca. AD 1267+. Locally minted coins following the French design were introduced a little later and circulated along with them.

Mosaic Room: Excavations were undertaken in the Mosaic Room, also known as Room C, in the South Stoa during May and June 2015 as part of conservation efforts for the Eutychia mosaic (Fig. 4). The goal was to clear the area below the mosaic down to bedrock and to excavate the remaining well in order to lay down a new and permanent substructure for the restored mosaic.

Significant quantities of later Neolithic pottery were consistently found in a dark red pebbly soil in both shallow pits and re-deposited in much later fills. This red pebbly soil was found both in natural depressions in the bedrock and re-deposited in fills that can be associated with activities in the area during the later Classical period. A Protogeometric rock-cut grave contained fragmentary human remains and a gold hair spiral, a pedestal cup and a small lekythos that provide a date for the burial of ca. 1050 BC (Fig. 5).

Prior to the construction of the Stoa, a series of circular pits were cut into the bedrock and filled in the late 4th and early 3rd c. BC in the back room of shop VI. Some of these pits were cut by the foundation trenches for the walls of shops VI and VII, themselves cut into bedrock. In one of the foundation trenches, fragments of a one-piece kantharos and a semiglazed bowl give a date in the 270s BC for the construction of the Stoa. Immediately S of well VI, in the front room of Shop VI, a very hard baked clay surface covered a shallow oval pit containing nine coins. The latest coin is a bronze pegasus-trident of Price’s group 7 early (303-275 BC) and its slightly worn condition suggest a date for the entire hoard of the early 3rd c. BC. The presence of the coin hoard and the fact that it was securely sealed into place support the excavators’ interpretation that this is a foundation deposit for the building.

Several contexts date the insertion of wells VI and VII to around 200 BC. The lower fill of well VI contained three transport amphorae and ten smaller vessels that date to the 1st century AD. This fill was slightly higher than the Peirene channel outlet, but it did not completely block the flow of water.

The most drastic remodelling of the shops dates to the late 1st-early 2nd c. AD, on the basis of multiple contexts related to this phase. The date of the remodelling and the possibility that the wells still provided water seems to indicate that this part of the South Stoa still retained its original form 150 years after the colony was founded. Circa 100 AD, the interior walls of the shops were robbed down to their lowest two courses and the robbing trenches filled after which walls of Room C were constructed. The statumen layer of the Eutychia mosaic yielded some important finds, including parts of an inscription, fragments of an over life-sized marble wing belonging to a Nike figure, a bronze finger from a life-sized statue (Fig. 6) and a ring bezel with a seated Zeus (Fig. 7), most of which date to the 1st c. AD. Two fragments of pottery date to the mid-2nd c. AD. Several examples of ESB form 80 and Candarli form L19 can also date into the 2nd c. AD.
Author
John BENNET
Bibliographic reference(s)
Unpublished field report, ASCSA (G. Sanders – S. James).
Date of creation
2016-08-31 00:00:00
Last modification
2018-08-22 09:24:48
Picture(s) 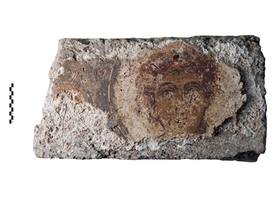 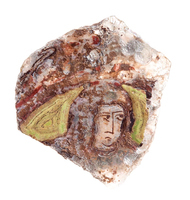 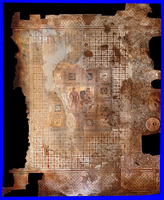 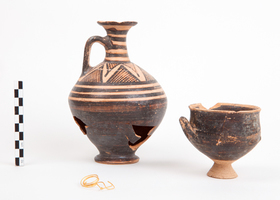 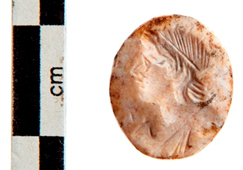