Key-words
Bone - Metal - Wood - Architectural terracotta - Tools/weapons - Hearth/Kiln/Oven - Tomb - Residence - Pipe/drain - Fortifications - Stone - Domestic space - Cemetery - Material Type - Find Type - Building Type - Site Type
Type of Operation
Excavation - Research excavation
Institution
Belgian School at Athens
Toponym
Sision, Kato Sisi
Linked Record
2007200820092010201120152016201720182019
Report
Sissi (Sisi). J. Driessen (Belgian School/UC Louvain) and I. Schoep (Belgian School/KU Leuven) report on the third season of excavation at the Minoan settlement and cemetery on the Buffo (Kefali tou Agiou Antoniou), during which work continued on the six zones already opened.
In zone 1, the cemetery, several Prepalatial structures were investigated. Building 1.10 was cleared. This held the remains of some 20 people in a mix of primary and secondary depositions, with the deposits sealed by layers of pebbles: beside it, 1.9 was an ossuary containing secondary depositions only. The EMIIA structure 1.11-1.12 was also completely excavated. Above the original burial layer, which contained at least four primary but disturbed depositions and a number of clay containers holding perinatals, later burials were made, especially to the south, including another MMIIB pithos burial. Several other heavily eroded burial structures were cleared. Work was started on a burial structure to the west, where a solid and large rectangular structure with internal partitions was visible before excavation. Its surface layer yielded at least one pithos burial.
In zone 2, excavation of a second megalithic structure (BC) north of the Davaras building confirmed that this too dated to the Neopalatial period, with a similar size and construction (Fig. 1). Its floor deposit yielded several coarseware vessels, stone and clay weights, and stone and metal tools, all suggesting that it too had an industrial function. However, on the floors of the two northern rooms were found two small stone figurines of Cycladic inspiration (Fig. 2). Excavation of the southeast room yielded a large tub set on its side within the floor, covering a neonatal burial.
In zones 3-4, on the summit of the hill, more of the large Postpalatial LMIIIB building was revealed. The centre of the complex was occupied by a small shrine in which were found another clay tube, which clearly supported a bowl, and a series of conical bowls (typical for Sissi) placed in a row behind a triangular stone which perhaps served as an altar (Fig. 3). Next to the slab was a complete triton shell and several larger vessels, including two stirrup jars, which may originally have stood on a bench against the east wall. This room opens to the south into a large hall (3.1) with two worked sandstone bases on the long axis of the room with traces of a fireplace between them (Fig. 4). On the clay floor of this hall were at least two small tripod cooking pots, a large stirrup jar, a stemmed goblet and two fragmentary clay tubes, one of which was quite large (they must also have served as vase supports). The hall is accessible from the south; in front of it were fragments of a krater.
To the north and northwest of the large hall, a series of rooms against the north façade was examined. The northeastern room had a large grinding stone, a pounder an large shell deposited on its latest floor. A room to its west contained a series of conical bowls, a triton shell, stone tools and a stone mortar; this room had originally been plastered and had a terracotta drain which ran through its eastern wall to the space beyond. In its latest levels, this latter space had a cooking dish, but lower in the floor a stone drain continued the line of the above-mentioned terracotta drain; this was set in a level which contained LMIIIA1 pottery. A room to the southwest yielded a complete stirrup jar and a fragmentary stone axe, as well as large concentrations of fallen white plaster.
It is still unclear whether zone 5, set on the lower southern slope of the summit, forms a separate construction or is part of the complex seen in zones 3-4. It does not have such large units and may have had a mostly industrial and storage function (several small bronze tools were found): there is evidence for the relaying of floors and the modification of walls at several spots. Between zones 3-4 and 5 was a large, shallow pit containing much animal bone and pottery. On the eastern side is a sequence of three rooms, all with pebble floors. The northern room (5.13) is one of the larger spaces in zone 5: it had plentiful traces of fire destruction and yielded yet another complete clay tube, a poppy-shaped rhyton, a jug and a larnax fragment. Some vases seem to have fallen from above. It was accessed from the east from a small room also with traces of fire destruction; in this room lay a deposit of small vases including several cups as well as much carbonized wood. The area to the east may have been an internal court; a tripod mortar, found upside down with a stone tool on it, was recovered in situ to the east, as well as a small shell deposit. The final destruction in LMIIIB seems to have been contemporary with that of zones 3-4.
Surface clearing in zone 6 revealed a large rectangular stone with many depressions (a kernos). The unfortunate discovery of a World War II mortar grenade interrupted work here. A sounding was then opened against the Cyclopean wall at the southwestern foot of the site; dense fill here contained much Early Minoan and Middle Minoan pottery, perhaps brought in for the construction of the wall, which seems not to have lasted beyond the Neopalatial period.
Author
Don EVELY
Bibliographic reference(s)
sites.uclouvain.be/sarpedon Unpublished field report, Belgian School at Athens
Date of creation
2011-02-08 00:00:00
Last modification
2018-08-22 09:24:34
Picture(s) 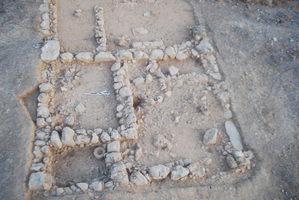 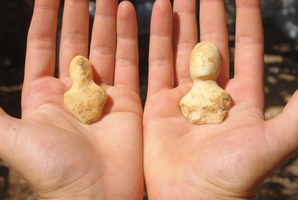 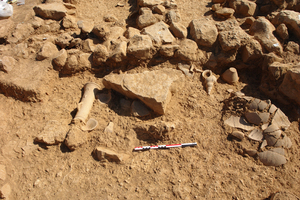 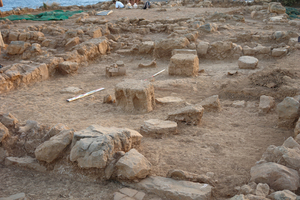