Excavation continued in the central courtyard (Fig. 1), where excavation near the western area brought to light significant remains of the Early Minoan IIA period. After the settlement was abandoned and all objects were left on the ground, a monumental building was constructed to the east of the village. Although destroyed by fire in 2500 BC, the remains were incorporated into the construction of a new monumental complex, dated to around 1700 BC. Further excavation of this area revealed a floor coated with mortar, and a clay pipe 33m long from the central courtyard to the east slope.

In other places on the hill, remains were found of later phases, including a building destroyed by earthquake in MMIIIA, and a layer of LMII-IIIA1 pottery. From the same period there is a grave, which was constructed during an earlier building phase of the Neopalatial period (Fig. 2). The grave contained an almost complete skeleton of a woman, who was interred with an ivory handled bronze mirror, gold and bronze pieces, a necklace of 15 gold pieces and small gold earrings (Fig. 3). Graves of this type are relatively rare in Crete and are found only in Knossos and Chania. 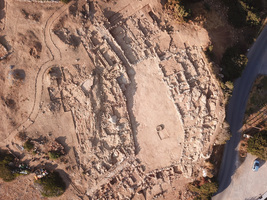 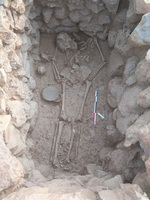 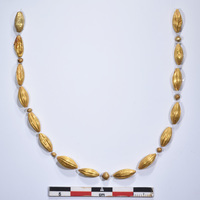