The pick-up survey located a discrete scatter of material c. 55x50m, approximately aligned northeast-southwest. All the pottery has been processed and preliminary reading reveals significant Early-Middle Roman activity continuing (probably to a diminished extent) into Late Roman, but with no post-Roman evidence. Uniquely within the study area, significant quantities of chipped stone (including a large collection of debitage) are dominated by obsidian: nine obsidian blades were discovered, with flint present in lesser quantities. The obsidian blades and bladelets include examples of probable Early Helladic and potentially Neolithic date, and roughly coincide with the distribution of Early Helladic pottery (Figs 2,3). After the prehistoric period, activity resumed during the Classical period: apart from small quantities of possible Archaic material, the majority of fineware is securely Classical-early Hellenistic, comprising small quantities of tableware. As in the ‘Ploughed Field’ area, more substantial evidence of activity appears from later Hellenistic times onwards.

Three excavation trenches were opened in an area where concentrations of flint lithics were found in 2013. Notwithstanding 100% collection in 2013, the recovery of significant surface artefacts attests to processes of erosion accelerated by fire damage to soil and vegetation in 2012. The principal functions of Trench 1 were to clarify both the character and chronology of lithic manufacture in this area, to establish any functional or chronological association with historic oolite exploitation along the Kenchreai Quarry Line and to place it within the broader regional historical narrative. Trench 1 (Fig. 4)produced no in situ anthropogenic deposits, just unstratified soils to a maximum depth of 43cm. Hellenistic-Middle Roman transport amphorae, cups and cookwares dominate the surface and thin underlying fire-damaged soil layers, while below this Roman material is absent, but prehistoric (including Late Helladic) pottery more abundant and lithics more numerous than pottery (Fig. 5). The entire deposit appears to reflect erosion downslope of whole deposit(s) probably over a small distance (noting limited abrasion). Upslope, Trenches 2 and 3 provided controls for Trench 1. In both, the pottery is of similar date and type to that above the base of the fire-damaged soil layer of Trench 1. Prehistoric pottery is uncommon. Pottery in Trench 2 exhibits less abrasion from trampling than that in Trench 1, and in Trench 3 damage was likely caused by trampling. These results will assist in the interpretation of 2013 surface finds from large areas of Quarry Complex A.

In 2016 magnetometry and ground penetrating radar survey were targeted in areas where study of the 2013 finds indicated concentrations of interest, successfully identifying subsurface features. Given the relatively low-lying study area, the magnetic signal was unexpectedly obscured in several places by the effects of lightning, marked by yellow crosses on the plan. Possible rock edges were identified north of the quarried ridge. At the east end of the ‘Ploughed Field’, a shallow linear feature may be a ditch, while at its west end, a probable buried quarry face was identified parallel to faces visible immediately to the south (Fig. 6). Features in the same area trending approximately parallel and perpendicular to the visible quarry faces at 0.24m and 0.8m depth correspond to the locations of building materials recovered in 2013. Additional data processing is required to determine whether these represent the remains of built structures and/or quarry faces.

Drone photography (Fig. 7) provided a seamless photographic orthomosaic and digital elevation model of the 2013 study area suitable for interpretation of field data and as the basis of the project’s GIS study.

In 2016 the project also completed processing of artefacts recovered in 2013 and work to characterise ceramic assemblages related to quarrying and other activities continued. Broad trends across significant parts of the study area were identified. A few prehistoric (Early and Late Bronze Age) sherds were recovered. Activity then resumed in Archaic-Classical (on a large scale from Hellenistic times) and continued in most areas until the seventh century AD. Local/regional ceramics were consistently favoured. Ruined structures in central Quarry Complex A date to the Ottoman period (15th-18th centuries), although fine slipped Classical-Hellenistic tiles, probably from a monumental structure, were re-used within them. The preliminary tile fabric classification developed in 2015 was refined and a number of pithos types identified. Study of the glass finds from 2013 was completed: most diagnostic pieces of window and vessel glass are Early Byzantine. Roman glass (mostly goblet fragments) is present in smaller quantities, but no pre-Roman glass has been identified.
Author
John BENNET
Bibliographic reference(s)
Unpublished field report, British School at Athens
Date of creation
2017-07-12 00:00:00
Last modification
2018-08-22 09:24:50
Picture(s) 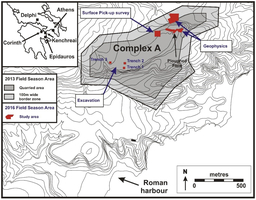 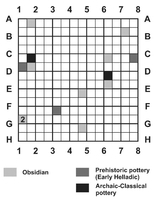 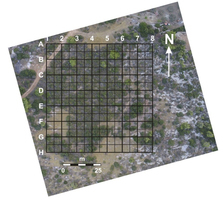 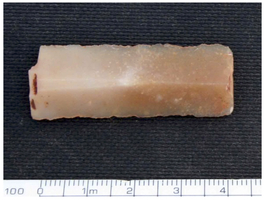 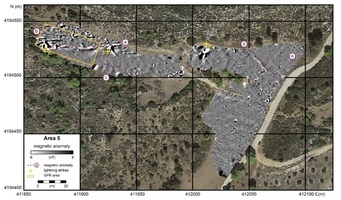 Fig. 6/ Kenchreai Quarries Survey 2016: plan of geophysical survey in Area 5; the 'Ploughed Field' lies in the centre of the image towards the top.