Toponym
Sision, Kato Sisi
Linked Record
2007200820092010201120152016201720182019
Report
Sissi/Sisi. J. Driessen (Belgian School/Leuven) and I. Schoep (Leuven) report on the first season of excavations at the M settlement on Kefali tou Ag. Antoniou. Lying 4km E of Mallia on coastal routes, it has a strategic importance (Fig. 1).
Work in 2007 involved geo-radar prospection, aerial photography and survey, all designed to reveal the most promising areas for excavation. Ceramics collected in the survey date the earliest apparent occupation to EM IIA, with material from LM II being the latest; one fragment carries a Linear A sign. The excavation shows early burials by the seashore and at least one large structure (perhaps 35 x 25m) on the summit: of EM III−MM IA construction, this was reused into LM I, reoccupied in LM IIIB and then finally destroyed.
Four areas were excavated (Fig. 2). Zone 1 (the lowest terrace by the sea at the N) was a burial area (EM III/MM IA and MM IIB) with rock-shelters and over 12 built ‘house tombs’: 2 rooms in one house-tomb yielded EM III−MM IA cups; near another such tomb was a MM I−II pottery deposit, consisting largely of pouring and drinking vessels. Zone 2, inland and on the terrace immediately above, is defined by a wall which could have served defensive purposes. There are at least 3 structures made from large stones (one investigated by C. Davaras in the 1960s): investigations between 2 of them show they were set on destruction debris of Neopalatial date; to the SW, redeposited burnt material of MM II lies under the 3rd. On the summit, in zones 3 and 4, are several discrete structures, some of which were visible on the surface (an impressive N−S wall to the NW, with threshold). This limits a room to the W in zone 3: a platform and storage jars on and set into the floor, a funnel and a deep bowl were covered by a destruction layer (burnt to the S) with much pumice intermixed. To the S were smaller rooms and corridors: one space held a pithos top, inverted and perhaps acting as a basin; another yielded a pithos, jar and decorated krater, to which a LM IIIB date can be assigned. In a 3rd trench to the E was a fine façade of limestone: running W−E, it turns to the N, and at its S end its position is influenced by a likely access route. Behind it were further remains of walls, the latest was built over a possible drain containing Neopalatial sherds (elsewhere material of this and the Postpalatial era has been eroded away). Internal partition walls marked the earliest construction here in EM III−MM I. Zone 4, further S, has a megalithic wall with 3 rooms associated. A fine limestone column base was retrieved, perhaps reused and of Protopalatial date: the pottery is all Postpalatial and includes Chaniote imports (a small stirrup jar, from the same source, was found in zone 3).
Author
Catherine MORGAN
Bibliographic reference(s)
Unpublished field report, Belgian School at Athens.
Date of creation
2009-12-01 00:00:00
Last modification
2021-07-29 13:44:20
Picture(s) 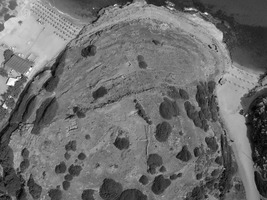