The building, covering 2680 sqm comprises at least two elongated wings. Ceramics date from EHI and EHII (300–2700 B.C.), including phiales, askoi and jugs. There were also a large number of cooking vessels and storage jars found here, many of which were imported from the Saronic Gulf and from the Cyclades. Debris from marine organisms were found in the excavation, mainly shells.

In the E part of the building, a grave was found, also dated to EHI. Human bones were found inside, perhaps of up to 30 people based on the number of skulls. Among the bones, there came to light ceramic vessels, stone beads, and a marble figurine. 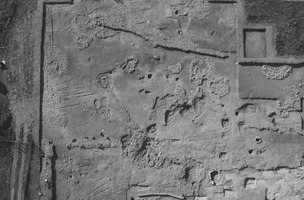 Fig. 1/ The EH structure from E

Fig. 2/ EH grave with finds in situ. View from SW 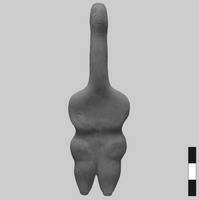