Building A measures 15.5 x 12.5m, and consist of a central room surrounded by smaller units to the N, S and W; it appears to be an agricultural facility. Outside to the N two ceramic kilns were found, and also remains of a third. A dense destruction layer was cleared from this area, containing mainly tiles, fragments of storage vessels and amphoras. Black and unpainted pottery of the Hellenistic period was found, and also six leads weights, and 12 bronze coins.

Building E was located on a lower terrace. The foundations of Building B appeared to be Late Hellenistic (second - first century BC). To the S of Building A, a layer of prehistoric material was found, including handmade pottery of the Bronze and Iron ages.

35 graves were excavated in the area of the cemetery. They were oriented EW, with the exception of four graves oriented NS or SE-NW. Most were simple pits, a few covered with limestone slabs. A few graves were cists (Fig. 2) or tiled roof graves. Grave goods included pottery, plaques, lamps, and coins from the Roman imperial period.

Among the Roman graves was a prehistoric pit, containing many stone tools and coarse pottery. The pottery dates to the Neolithic and Bronze Age. Another small pit showed evidence of cremation. 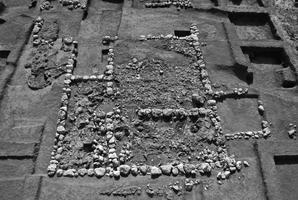 Fig. 2/ View of the necropolis