Property of I. Kalabakou, Kanoni, Corfu. Katerina Kanta-Kitsou and Nausika Rouva (H’ ΕΠΚΑ) report on work conducted at this plot in 2006.

In the NE part of the excavation three walls (1, 2 and 5) were discovered, along with an embankment of tiles, and archaic period sherds (including local amphora pieces). To the SW, two walls (3 and 4) were discovered.

In the S part of the site, finds included archaic period sherds, stones of a medium size and a few bones.

Other special finds included fragments of archaic period lamps, sherds of black-painted lamps of the classical and Hellenistic periods, skyphos pieces, stone objects, two bronze coins, and several other objects which date the whole site between the archaic and modern periods. 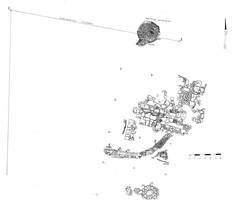