Maria Andreadaki-Vlazaki (ΚΕ EPKA) reports the continuation of the excavation in the area of the expanded courtyard of the early LM IIIB period (beginning of the 13th c. B.C.) (Fig. 1). During the excavation of the trenches Θ and ΙΕ, it was confirmed that the extensive concentration of stones that were surrounded by a line of large unworked boulders date to the LM IIIC period.  The structure resembles a fortification (Fig. 2). Underneath the stone pile, the early LM IIIB destruction layer was unearthed, while underneath the latter was the floor of the expanded courtyard.

New and unique finds were discovered on the floor, which is of great quality, and built of a layer of plaster with a significant amount of small pebbles (tarazza). a) In the entirety of the excavated area, the destruction layer was full of burnt tiles and bunt wood, materials that seem to have derived from various separate structures in the non-excavated area towards the north and the west. Part of the burnt wood might have belonged to a wooden ceiling, which potentially covered this semi-opened part of the courtyard with the painted surfaces (Fig.  3). b) A low earthen step with an encrusted surface occupies the east side of the excavated area (Fig. 3,4). c) A small rectangular chest-shaped structure in contact with the step was also located in the west. In its interior, a collapsed plasterboard was recovered, a material that was found in Minoan Kydonia for the first time, along with a small concentration of animal bones (Fig.  3). d) At the north limit of the excavation, the starting point of another painted surface was discovered, and it seems that the courtyard was surrounded by walls with coloured slip.

At the central and west part of the plot, the following evidence came to light: a) It was verified that wall 3 is a structure newer than wall 19 and floor 37, which has been overlaid above the destruction layer of wall 19. According to the pottery study, wall 19 and floor 37 belong to the 1st c. AD (Fig.  1), while wall 3 and floors 8, 3 and 4 belong to the 4th c. AD, b) The largest part of moat Δ was covered by layers of the later and early archaic as well as of the late geometric times (stone piles: Fig. 6). The Archaic layers stand out for their abundant pottery, mainly matt-painted cups. On top of floor 42 the east edge of the pithos sherds concentration which came to light in 2007 and 2008 (LG II), was uncovered along with a lot of ash and “burning”. 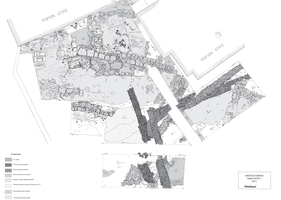 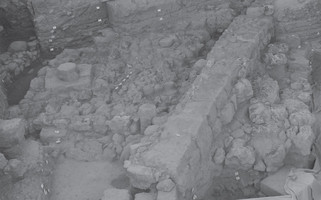 Fig. 2/ Stone concentration which is defined in the south and west by a line of large unworked stones (LM IIIC period) 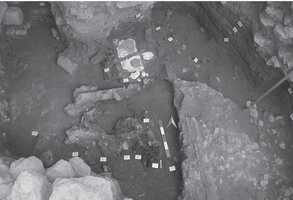 Fig. 3/ Collapsed destruction material and structures on top of the early LM IIIB floor of the courtyard 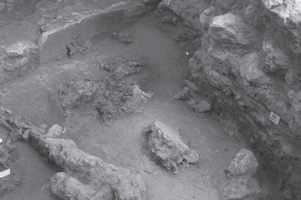 Fig. 4/ The encrusted with red colour step after its cleaning 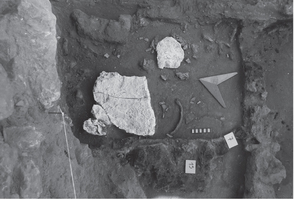 Fig. 5/ The remains of the wooden structure («chest») with the collapsed and broken plasterboard, containing the animal bones at the bottom 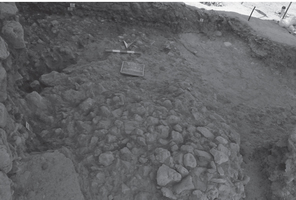 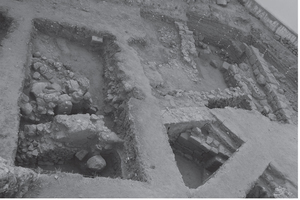 Fig. 7/ General view of moats ΔΕ-ΣΤ and ΙΓ and ΙΖ from Α. The discontinuation of the walls 19 (1st c. AD) and 3 (4th c. AD) is visible on the left side of the photograph, where fissure passage is 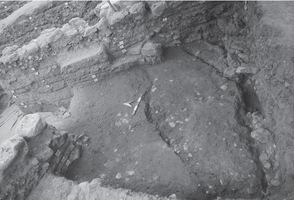