To the N a building of almost rectangular shape was found, with dimensions 17 x 9m. The limits of the floor to the NE-NW are unknown due to the boundaries of the site. In area β, a pithos burial was found, inside which there were various ceramic sherds, traces of bone, evidence of burning, and clay figurines. Area γ was likely a storage area. In area δ a well was discovered (Fig. 6) , filled with stones, sherds, and tile. A clay pipeline was also discovered to the NW of the well.

A high density of pottery was found in the road area in the NE part of the excavation site. A large number of archaic sherds were found, with painted decoration and in good condition. There were also a number of red tiles.

A silver stater of the classical period was found, depicting a cow suckling a calf on the obverse and a plat on the reverse. A total of 66 bronze coins dating to 248–29 BC were found. Clay figurines were found and pyramidal loomweight. Bronze finds included nails, looks and one piece of jewellery in the shape of a snouted animal. A few pieces of stone and glass were also found. 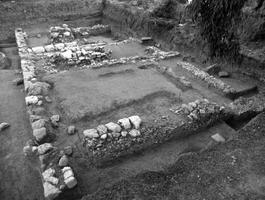 Fig. 3/ General view of the building and road (from E) Fig. 4/ General view of the S building (from SE) 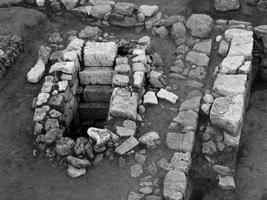 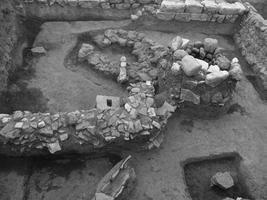 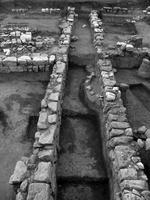