Samikon. The city wall (Fig. 1) and all visible architectural remains within it were recorded. The residential architecture indicates 2 chronological phases. In the centre, S of the agora, small isolated buildings were apparently arranged unsystematically, whereas in the E part of the city, residential houses were arranged along a rectilinear street grid. The city appears to have been built in the E4thCt BC.

Platiana. In the anc. city (Fig. 2) above mod. Platiana, the city walls, visible structures within them and a complex outside, to the SW, were recorded. The upper town contains a theatre and several other large public buildings, as well as smaller residential houses. These are arranged along a rectilinear street grid. Many remains of residential houses were also found on the very steep S slope. The upper town street grid is continuous here, despite the difficult topographic conditions. An isolated complex of buildings is located in the valley, far below the city. A tower house, built of large blocks, probably controlled the path leading up to the town. No finds predate the L5thCt BC.

Lepreon. The 2008 campaign located the city walls and the S plateau with the Temple of Demeter. Small rooms are integrated in the city wall almost along its entire length, as also within the wall separating the upper and lower town. A building in the W part of the wall, recently used as an animal shelter, must have been a gate. Besides Geo stray finds, artefacts from Lepreon include numerous Ar objects, such as pyxis lids, and many items (for example, sherds of plates, footed cups and skyphoi) of the 5th and especially the 4thCt BC).

Vrestos. Only initial fieldwork took place in 2008 at the anc. settlement near Vrestos. At this stage, there is evidence of a virtually circular city wall with several rectangular towers and a circular one in the N.
Author
Catherine MORGAN
Bibliographic reference(s)
Unpublished field report,  Deutsches Archäologisches Institut
Date of creation
2010-03-10 00:00:00
Last modification
2018-08-22 09:24:31
Picture(s) 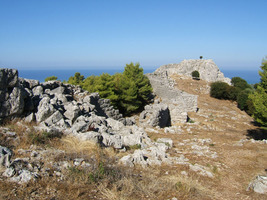 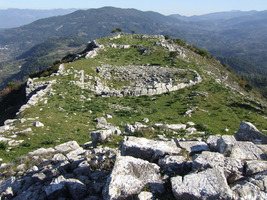