Toponym
Trapeza, Nea Voura
Linked Record
20102020
Report
Trapeza. The five-year programme of excavation directed by Dr A. Vordos (Ephorate of Antiquities of Achaia), with the participation of Dr E. Borgna (Udine), together with students from Udine, Trieste and Venice, and postgraduates from Greek universities, revealed a quantity of grave offerings and tombs of high quality in the Mycenaean cemetery of Trapeza 7km SW of Aigion (Fig. 1). The finds testify to the surprising cultural and social vitality of the area. The plateau is identified with the polis of Rhupai, the metropolis of Croton in S Italy.

The Mycenaean cemetery lies on the SW slope of the plateau above the ancient road leading to the acropolis of the historical period. The investigated tombs (chamber tombs cut into the soft bedrock: Figs 2-4) are arranged on at least 3 level terraces along the S side of Trapeza, parallel to one another, a few m apart, and orientated N-S. The dimensions of the tombs are: c. 3.5-4m (width of chamber), c. 6-7m (length of dromos) and 1.5m (width of dromos). The chambers are of various shapes: circular, rectangular, as well as almost square with rounded corners, with irregular walls. Under the chambers were revealed oblong pits and niches carved in the dromos-walls for the secondary redeposition of older burials, as well as pits – elliptical or rectangular in form – in the dromos-floors, which were found empty and may have originally been carved to conceal a ritual equipment. Of particular significance are the side chambers in the dromoi which were used for child burials.

Tomb use was long-lived and intensive. The chambers collapsed already in historical times, between the Geometric and Archaic periods, as demonstrated by the finds in the ‘craters’ left in the ground by the collapse of the chamber roofs.

The cemetery, founded in the LHIIIA1 period, enjoyed a particularly intense peak of use in the early-palatial period of the Mycenaean world, contemporary with the floruit of the great centres like Mycenae, Tiryns and Pylos. There was a significant period of reuse in the post-palatial period (12th c. BC), probably after early LHIIIC, when the tombs were re-opened and once again similarly constituted a space for the performance of burial rites to the end of the Bronze Age, probably into the Sub-Mycenaean period.

The quality of finds of the cemetery is demonstrated by the rich assemblages of vessels which show a dependence on palatial prototypes as well as independent links between wider regions from the W Peloponnese to Crete (Figs 5-8). Offerings are enriched by a number of sealstones and every type of bead and stone of various materials (glass, faience, gold, cornelian, rock crystal) which formed necklaces and elaborate jewellery, gold pendants in the form of boucrania which allude to trade links with the E Aegean and Cyprus. Some tombs attest to the presence of elite identities, as their social status and probable links to the palaces are expressed especially by their rich combination of weapons and tools (Fig. 9).

The post-palatial period, in the 12th c. BC and later, comprises different phases of use, which are particularly impressive for their ritual practices, which concern the way of confronting bones and offerings of previous dead individuals, who, according to the excavators, were understood as glorious ancestors and received offerings. The aim of these rituals, they suggest, was the creation of a genealogical bond through activation of the memory of a past perceived as a native and constituent element of the community

In addition the finds from the fill of the dromoi offer exclusive witness of social practices which mark the end of the performance of a funeral, and also of rituals, such as offerings and libations in front of the sealed doors of the chambers, during post-mortem visits to the tombs. Thus, the excavators suggest, the cemetery also constitutes a space for the passing on of traditions and social memory.

The location of the Mycenaean settlement of Trapeza is not yet clear. It is probable that, during the earlier use period of the necropolis, the settlement lay on a rise about 100m S of Trapeza. Current investigation of a Middle Helladic settlement in progress there has produced sporadic remains of Mycenaean ceramics.
Author
John BENNET
Bibliographic reference(s)
https://www.culture.gov.gr/el/Information/SitePages/view.aspx?nID=3547
Date of creation
2020-11-01 22:09:59
Last modification
2020-11-02 21:06:17
Picture(s) Fig. 1/ Aerial view of the acropolis of Trapeza of the historical period with the roof over the large temple. 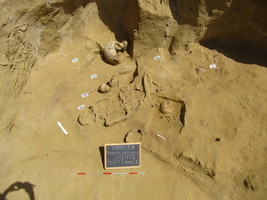 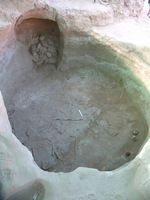 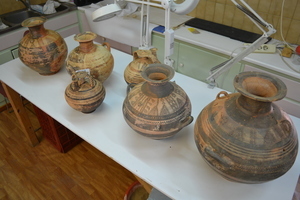 Fig. 5/ Group of vessels from the Mycenaean cemetery of Trapeza. 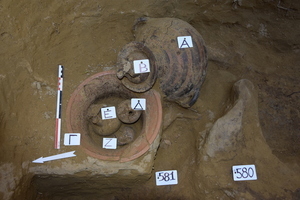 Fig. 6/ Group of vessels in the chamber of Tomb 6. 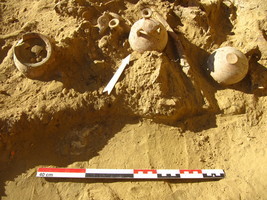 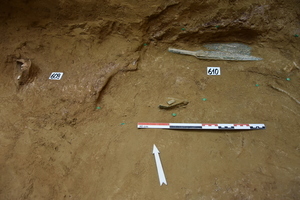 Fig. 9/ Bronze weapons in the chamber of Tomb 6.