Hersonissos, Kato Gouves. Stella Mandalaki (ΚΓ’ EPKA) reports that at the coastal area north of the hotel «AMIRANDES», architectural remains of a Minoan settlement of the Protopalatial period were unearthed. The older evidence of habitation is found on the western part of the excavated area, Area A, and is dated to the ΜΜ ΙΑ period (Fig. 1). In the area, at least 10 walls were found, most of whose do not fall into the formation of rooms, and belong to different construction phases from the MM IB until the MM IIIA period. A characteristic example is a double wall which defines the outdoor space towards the W and was potentially used for the support of an upper floor. The discovery of a large bin-shaped vessel and part of a pottery wheel on the upper deposits of the outdoor space, fallen vertically, supports this hypothesis. The double wall defines part of a room towards the E. Underneath the sub-foundation layer of this very room, apart from MM pottery, a few PM shards of the Agios Onouphrios style were collected. In the interior of the room a destruction layer consisting mainly of conical cups and deriving from the upper floor of the building, was detected. North of the room, an outdoor space with at least three construction phases was discovered: a pebble floor, and two disturbed cobbled surfaces (Fig. 2). The room and parts of the walls that were found on the northeastern part of the trench are based on top of the cobbled surface.

In most trial trenches west of Area A, structural material, pottery and brick parts of the superstructure of destroyed walls were detected. In one trench, parts of walls of two rooms were discovered (Fig. 3). On the floor of one of these rooms a circular carving containing structural material was opened during a later construction phase. This might have been used as a rubbish pit.

The finds in the southern trial trench inside the outdoor space of Sector Ι were particularly interesting. A storage complex of five rooms with an in situ deposit of vessels in one of them was uncovered (Fig. 4). In this room a deposit containing nine vessels was detected (Fig. 5), one of which is an intact amphora, two are bin-shaped vessels and the rest are one-handled cups. After the removal of the vessels, it became apparent that an older deposit phase with nine more vessels (single-handled conical and carinated cups) also existed.

The walls of the complex are preserved only a few blocks high. No floors were identified; however the natural rock was located in all spaces. In the backfill of the rooms destruction layers were detected, containing abundant pottery, collapsed structure material, marine pebbles, hard calcareous soil, and brick fragments, which derived from the upper storey of the building. The discovery of many handless conical cups in the fills of the upper floor, which are dated to the MM IIIA period, should be noted. Apart from the handless cups, plenty of pithoi shards, and cooking pot shards with burning traces at their body were collected. In the south part of the storage complex another destruction layer with plenty of structure material was uncovered. On the west of the complex a circular carving was found on the height datum, potentially for the placement of a pithos or for workshop purposes.

East of Area A with the cobbled floor, parts of at least six rooms of the Protopalatial settlement were excavated. In the deposit of the rooms a destruction layer with intact and broken vessels was found, along with the structure material that has collapsed from the superstructure of the walls, brick fragments, calcareous soil, sea pebbles and plaster; these are mainly storey material. Specifically, in trench M4/N4 evidence of the existence of two storeys were detected. Three overlapping floors made of pebbles and mortar, pressed soil and sand as well as an one-course wall above the floors probably belong to the second storey. In the fill of the first storey belongs the destruction layer of vessels that was found in the upper layers in the interior of the ground floor.

The destruction layer of vessels from the upper floor of four rooms in trenches M7/M8 was significantly extended (Fig. 6, Fig. 7, Fig. 8). It is mainly comprised of single-handled conical cups, cooking pots, amphorae, spouts, juglets, and small pithoi. Twenty two nearly intact samples were collected, while the majority of the shards suggests that they were many more. From the destruction layer of the southern room of Trench M8/N8 the large storage vessels were missing, while the small and medium-sized vessels were more frequent. Among them, shards of cooking pots with external burning traces, as well as a few fragments of vessels with tortoise-shell ripple style decoration stand out. The latter, which are dated to the MM III period, are a terminus ante quem for the dating of the layer and the final habitation phase in the Protopalatial settlement in general. The discovery of abundant marine snails, shells, and sea urchins in relation to the cooking pots in the destruction layer of the southern room of the same trench should be mentioned.

The situation at the Northeastern part of the settlement is different; three elongated strong walls, which were built out of large limestone blocks were discovered (Fig. 9). Among these, an older wall was found. They potentially were strong retaining walls that defined the Minoan settlement towards the N. On the eastern part of them, parts of walls were found, signifying the existence of at least five rooms. In their interior, the characteristic deposit with coarse pottery of utilitarian use, brick fragments, calcareous soil and plaster  was found.

Based on the current archaeological data, it is highly possible that the Minoan settlement comprised a uniform building complex, which was destroyed from a fire during the end of the Protopalatial period or during the beginning of the Neopalatial period. A partial «reoccupation» is documented at the area with the strong elongated walls during the Geometric and Early Roman times (Fig. 10). 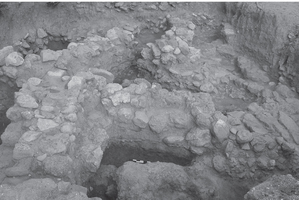 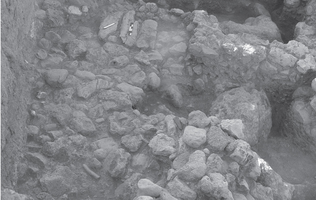 Fig. 3/ Formations of the natural rock with pebbles, parts of walls of rooms on the west of Area A 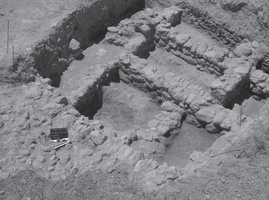 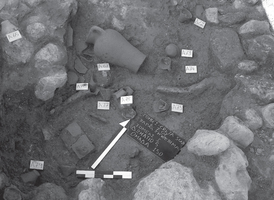 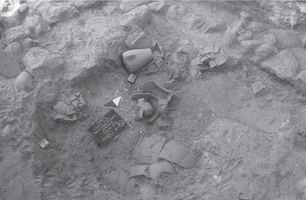 Fig. 7/ Trench Μ8/Ν8. Destruction layer with vessels, fallen from the floor of the settlement 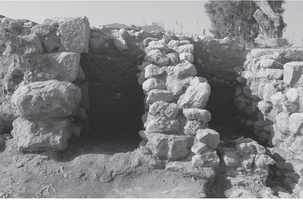 Fig. 8/ Strong walls on the Northeastern part of the installation

Fig. 9/ Walls of the settlement which extends towards the beach 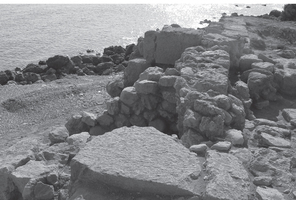 Fig. 10/ Strong walls on the Northeastern part of the Minoan installation, later interventions of the Geometric and Roman periods