Toponym
Velvina, Vilvina
Linked Record
2014201620172019
Report
Molykreio. N. Kaltsas and A. Moustaka (ASA) report on further excavation of the Sanctuary of Poseidon and Athena, where they investigated the area around the great altar (Fig. 1) with a view to identifying all its constituent parts in advance of future restoration.  A deposit of ash, bone and sherds was found, which produced vessel fragments of the Archaic period, probably of the 7th century BC, which demonstrates that the beginning of ritual activity here goes back at least that far.  A cut-out clay plaque depicting a sphinx was also found (Fig. 2).  Also of interest were the coins (silver and bronze) found in the area of the altar, indicators of the origin of the worshippers: a silver Aiginetan stater, two Archaic silver hemidrachms of Phokis, a silver hemidrachm of Sikyon and bronze coins of Megara, Alexander III, Corinth, Aitolia and Antigonos Gonatas.

Part of the foundation on the N side of Temple B came to light (Figs 3-4).  Within the temple and in the foundation fill were found – much damaged – parts of architectural members of poros and limestone.  Some fragments preserved their ancient paint.  Part of a geison with mutules demonstrates that the older temple, to which these belong, had been completed.  In the foundations of the temple were found two iron swords: one (0.53m long) has an elaborate handle, the other (0.39m long) was less lavish.
Author
John BENNET
Bibliographic reference(s)
Ergon (2019), 41-42.
Date of creation
2020-08-21 16:43:37
Last modification
2020-08-21 17:19:19
Picture(s) 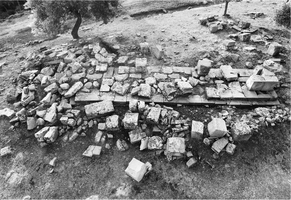 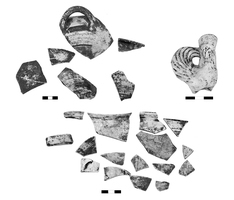 Fig. 2/ Molykreio Aitolias: Pottery from the deposit and the cut-out clay plaque depicting a sphinx. 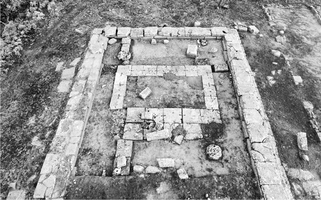 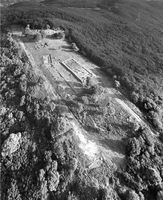