Toponym
Athens West (Philopappou, Kallithea, Petralona, Aigaleo), Athènes centre-Ouest
Linked Record
2011
Report
Votanikos, 59 Chalkidiki Street, property of I. Panou and Ch. Droulia. Giannis Mavrokefalidis (Γ’ ΕΠΚΑ) reports on excavation undertaken during the construction of a new eight-storey building, covering 200 square metres.
In the northern part of the plot, the southern wall (wall 1) of a room was found, oriented EW, almost intact and of length 2.57m. A second wall oriented NS forms an angle with this wall (wall 2), preserved to a length 1.62m.
The SW part of the plot contained a workshop area, in which there was found a basin of diameter 0.26m, connected to a narrow pipe running 0.63m. To the N was a rectangular clay slab with a downward slope, perhaps part of the same construction. The use of the basin is unknown, although it is possible that it was used in the production of oil or wine. Pottery sherds dates the area to the fifth century BC.
To the W of wall 1 there was another wall (wall 3) of length 1.45m, where it was cut off by a modern cistern. Even further W (3.55m) was another wall (wall 4) of length 0.57m, perhaps an extension of wall 4.
Three large refuse pits were also located in the S part of the plot, all oval with diameter 3.15m x 5.60m. In the N / NW of the plot there were also two drainage pits, the E of which was oriented EW and was 3.80m long, while the W was oriented NS and 1.80m long.
67 pottery assemblages were collected, the majority of which was from the Classical period, with some sherds of the Archaic and Geometric periods. A few sherds of the prehistoric periods were also collected in the second and third strata. One sherd of the sixth century BC had an inscription on it.
52 intact loom weights were collected, most of which were pyramidal. Three clay figurines were found of seated female figures, one clay figurine of an animal (pig), two bronze coins, a few obsidian blades, bronze, iron and lead pieces. 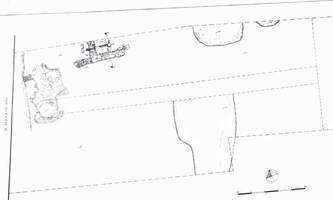 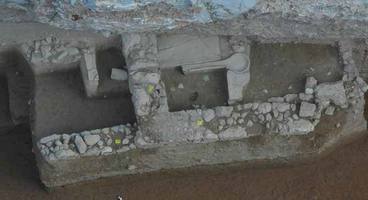 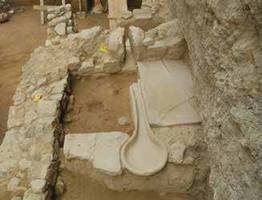