Toponym
Kolani
Linked Record
2012
Report
Methana, Kolani site. Christina Kazazaki (ΚΣΤ’ ΕΠΚΑ) reports on discoveries made during work on the laying of the city’s new electricity network. Nearby the Church of the Holy Trinity Loutropolis of Methana, various burials were located.
Roughly 98m along from the starting point of the excavation, there was evidence of combustion, found alongside burnt amphoras and black painted sherds of lekythoi.
To the E of this area, a porphyry sarcophagus was found (Fig. 1), covered over with red clay tiles. The structure was oriented EW with dimensions 1.8 x 0.6 x 0.4m. Two burials were found inside, with skeletons oriented with heads to the E, at least one of which was laid supine (Fig. 2). Fragments of five small bronze vessels were found in the sarcophagus.
C.4m SE of the sarcophagus was an assemblage of red tiles (0.85 x 0.5m), thought to cover a burial. Slightly deeper, there was a tiled roof grave oriented EW with dimensions 1.80 x 0.6 x 0.35m. Bone preservation was poor, but it is thought that the interred was laid in supine position with its head to the W. An obsidian blade and flint core were found inside.
220m E there were a number of burials. It is not known whether they comprised a cemetery or were individual burials, but they do seem to belong to the same chronological period.
Three walls were located, possibly demarcating a grave oriented EW. Inside there were traces of burning, two loomweights, an iron object, three bronze pieces (possibly from forks), decorated sherds including those of a black painted skyphos, and bones.
To the S and SE there were six graves, including four tiled-roof graves. To the E at a distance of 4.7m, there was another tiled-roof grave oriented EW, lined with red clay tiles. From this area, there was found a clay figurine of an enthroned female figure.
SW of the area was another tiled-roof grave, oriented EW with dimensions 1 x 0.36 x 0.25m. Skeletal remains were identified, as well as a black painted phiale and a miniature skyphos. The floor of the grave was covered in tiles, underneath which there was evidence of another burial.
S of this area at a deeper level there was an amphora-grave, in which grave goods included a bronze vessel, a skyphos, an oinochoe, a small pink-coloured skyphos and a few bones.
To the W of this there was another tiled-roof grave, oriented EW with dimensions 1.86 x 0.76 x 0.30m (Fig. 4). Two skeletons were found beneath, one with its head facing W in a supine position, the other facing E. Preservation of these bones was poor.
Removing the tiles on the floor of this grave revealed another burial, where there was preserved bones, a bronze handle, possibly of a ladle, and another bronze rod.
All of the graves seem to date to the late archaic period. 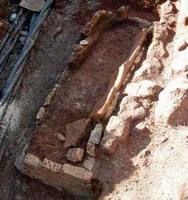 Fig. 1/ View of the porphyry sarcophagus 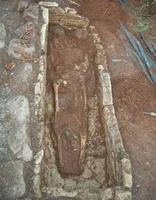 Fig. 2/ View of the articulated skeleton in the porphyry sarcophagus 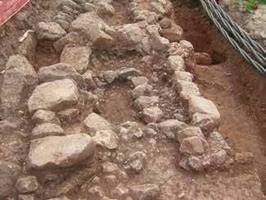 Fig. 3/ View of the rectangular enclosure space and S of this the second tiled-roof grave 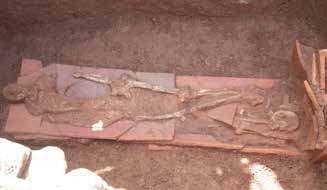