Toponym
Nea Smirni, Smyrni
Linked Record
20092013
Report
Nea Smyrni, 156 Agia Sophia Street. Anthi Dova (Β’ ΕΠΚΑ) reports on the discovery of a deposit of ancient pottery, found during ΔΕH electricity works on Agia Sophia Street, at the junction with Lesvos Street. The deposit went down to a depth of 1.10m below the road surface. Most of the pottery was coarse household pottery, and there were also waster sherds of burnt clay. Six pyramidal loomweights were also found (Fig. 1), one of which had not been fired. It is thought that this deposit comprises a rubbish dump from a nearby pottery workshop, from the archaic period. 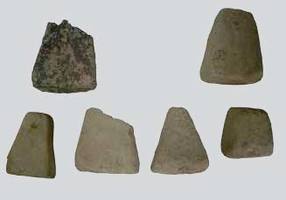