Toponym
Marathon, Marathonas
Linked Record
20092015201720182019
Report
Marathon, Brexiza. I. Dekoulakou (ASA) reports on continued excavations at the Sanctuary of the Egyptian Gods. Investigation focussed on Building B in area 24, where many broken vessels were found, including amphoras, skyphoi, jugs, lekanes and pinakides, all dating to the third century BC. A few sherds from earlier periods were also found. Tile fragments were found of wall decorations, and also a bronze coin of Gallinus (253-268 AD). A second Ionian column base was found, of a different shape to the one found last year.
In the S part of Building B, more wall decoration was found, and also glass fragments, amphoras, jugs, and a lamp of the third century AD. A tile was found inscribed with the word ΑΘΗΝΑΙΟΥ.
To the N, a rectangular structure was investigated. A tiled-roof grave of a child was also found here in area Θ, whose grave goods include pottery vessels of the third century AD. 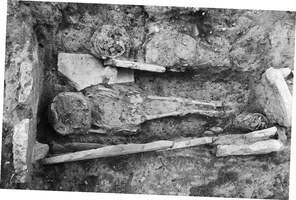 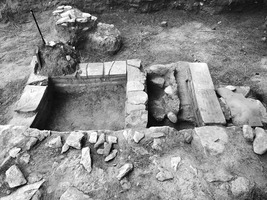 Fig. 3/ The interior of the enclosure 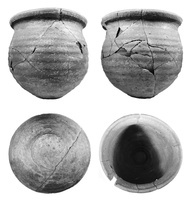 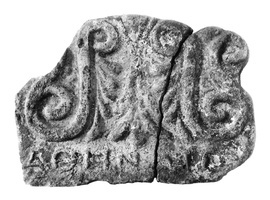