Toponym
Oleni, Olena
Linked Record
2006
Report
Municipality of Oleni, Arvaniti, Spilia. Panagiotis Moutzouridis (Z’ EPKA) reports on the excavation of a small Mycenaean cemetery on the slopes of a low hill. Initial discovery during public works of a chamber tomb of about 4.50 m. in width, was followed by systematic investigations in the area which led to a further four burials being identified.
The chamber tomb was severely damaged although two phases of use were identified. The final phase included two separate extended burials in the northern and southern sides of the chamber (Fig. 1). Both were poorly preserved, along with their respective grave goods, probably dated to Late Helladic IIIC (12th c. B.C.). The earlier phase included three parallel pits aligned on an E-W axis and covered by rough slabs. In the first pit was a single female burial in extended position, while in the second were two in contracted position with their heads at opposite ends. Finds associated with one of the bodies included a small three-handled amphora, while the second was associated with bronze blade. The third pit contained a single burial in extended position, with very few bones and grave goods. This grave may also be associated with some pottery vessels found nearby. This earlier phase of use probably took place during Late Helladic IIIA (14th c. BC). At the rear of the chamber was a burial niche containing a skeleton in extended position accompanied by a single amphora and the bones of secondary burials.
Further investigation led to the discovery of a further four pit burials (Fig. 2). All four pits were divided into two halves by a rubble wall and in all half was left empty (Fig. 3). The first pit contained skeletal remains, possibly female, along with a three-handled amphora, a three-handled straight-sided alabastron, a bronze ring and a total of 200 beads of steatite and carnelian. The second pit contained male skeletal remains, along with a three-handled alabastron, a razor and a whetstone. Above this interment was a Mycenaean figurine of type Φ found within a dipper and below a large slab which was probably the headstone. The third pit contained rare skeletal remains belonging to a child, along with a rounded alabastron. The fourth pit contained skeletal remains and was richly furnished with three metal objects, a kylix, a small three-handled amphora and three sealstones of steatite. According to the excavator, this final grave probably belonged to a person of status. 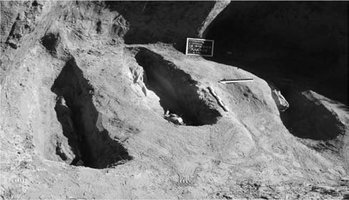 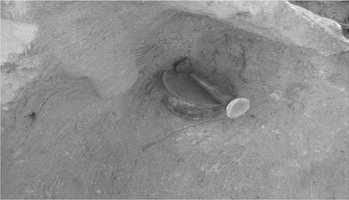 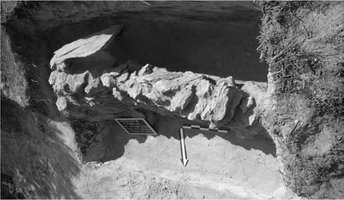