A large bronze foundry had been discovered south of the Olympieion (Temple of Olympian Zeus) in central Athens by J. Travlos in 1971. Travlos simply described the casting pit, and he dated, on the basis of associated finds, its period of use to the fifth and the fourth centuries BC. With the help of the Australian Archaeological Institute in Athens M. Leopald and G. Zimmer were granted by the Greek Ministry of Culture permission to conduct a minimum invasive geophysical survey of the area south of the Olympieion. The project was funded by the Thyssen Endowment Fund. In October 2019 roughly 60m2 were investigated using ground penetrating radar and multi-electrode resistivity tomography to verify the existence and the exact location of the ancient casting pit as well as to look for indications of other pits, ditches or foundations typical of Greek foundries of the fifth century BC.

Ground penetrating radar (at a frequency of 250 MHz) and electric resistivity tomography were used to distinguish different geological materials including man-made fillings and structures. The results of both methods from multiple parallel survey lines were combined to generate models of the subsurface. The main target of the survey was the casting pit of the fifth-century BC bronze foundry which was clearly located (Fig. 2). Further analysis of the preliminary results will reveal whether remains of any other pits or installations of the foundry were recorded in the data collected in October 2019. 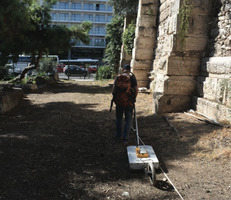 Fig. 2/ Electric resistivity (Ωm) distribution across one of the 2019 project’s survey lines. The line crosses the ancient casting pit which is clearly visible due to the high resistivity filling in contrast to its low resistivity geological surroundings, which consists of clay rich marl