Pallene, Kantza, Football court, (property of Kantza Emporiki Co.). Anna Plassara (B’ ΕΠΚΑ) reports on the discovery of a settlement dating from the Neolithic to the Middle Helladic periods (Fig. 1).

Neolithic settlement: 5 huts with stone paved floors and postholes were excavated (Fig. 2). In addition, deposit and storage pits were found containing seashells, obsidian blades and chips, and pottery sherds (Fig. 3). Small finds from the area include, apart from the aforementioned finds, an obsidian arrowhead, a white flint blade and stone axes (Fig. 4).

Middle Helladic settlement: Numerous stone-built structures (Figs. 5, 6) and 37 rock-cut pits were excavated. The structures contained obsidian blades and chips, and grey-Minyan pottery sherds (Fig. 7). The latter were also found in the pits (Fig. 8). The aforementioned structures include a circular floor paved with river pebbles (Fig. 9), and a building with two rooms and a hearth (Fig. 10). The building contained jugs, phialai, seashells, obsidian blades and chips, flint blades and chips and large quantities of Middle Helladic pottery sherds (Fig. 11). In addition to these, two burials in pithoi were found. The first pithos had been covered with a lekanis, which was found broken inside the pithos (Figs. 12, 13). The second pithos had been placed on its side in the ground (Fig. 14).

Additional finds from the area include 27 rock-cut channels, which attest to agricultural activities having taken place there in the Archaic period. 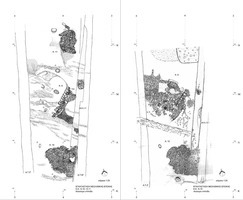 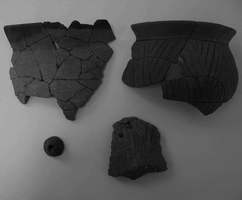 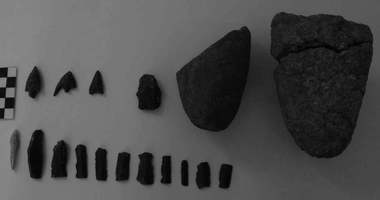 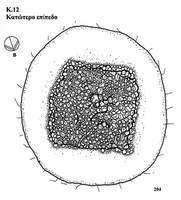 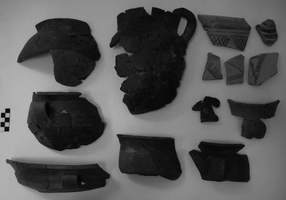 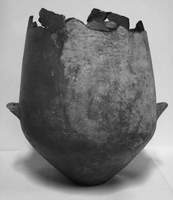 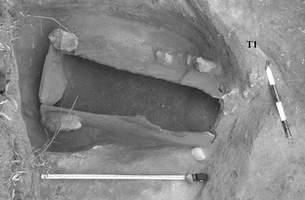 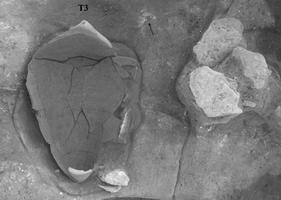 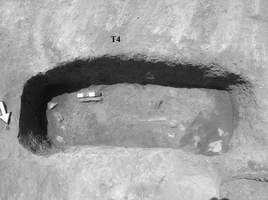