Knossos, Knossos Region. Amanda Kelly (University College Dublin) reports on a survey of the aqueducts of the Knossos region.

This project aims at the detailed diachronic survey of the Roman, Venetian and 19th century aqueducts of the Knossos area. An initial walking survey was conducted from the 29th of October to the 2nd November 2019 by Amanda Kelly and Brendan O’Neill (School of Archaeology, University College Dublin). The tracking of the aqueducts was done using a handheld Trimble GPS and eight 1:5000 Greek army maps (Geographical Service Army Maps). Four sections of the aqueduct trajectories were covered following four different routes: (a) Fundana to Skalani; (b) Ampela to Spilia; (c) Spilia to Caronissi and (d) Caronissi to Knossos village (west of the palace). An average of 15 km a day were walked. Measurements were taken of the aqueducts’ trajectories and elevations, and 1,400 photographs were taken of the aqueducts along their entire lengths.

It became apparent that the aqueduct commissioned by Mehmet Ali, the governor of Egypt (constructed under the direction of Mustafa Naïli Pasha in the 1830s) to supply Herakleion, was built directly over the Roman channel for most of the Roman aqueduct’s length (7.22 km). Roman channel and linings of opus signinum were detected at several places of the 19th century substructure. Between the springs at Fundana and the tunnel at Skalani, three 19th century bridges were located, none of which had been identified or recorded before. These were all single-arched gravity flow hydraulic systems. Examining their architecture closely helped in defining the masonry style of the 1830s water supply consisting of large roughly-cut stone surrounded by smaller chinking stones. Identification and recording of diagnostic characteristics of the different masonry styles (distinguishing between 19th century, Venetian and Roman architecture) was an important aspect of the project. The final section of the aqueduct, leading from the bridge at Spilia to the free-flow Venetian bridge at Caronissi was the better known as it had been followed in 1976 by Susan Walker and Richard Jones as part of the Knossos Survey, and was also included in Amanda Kelly’s doctoralfieldwork in 2000. At certain points, the 19th century trajectory and the Roman trajectory run parallel to each other and the Roman aqueduct stands to a height of 2.5 m. The Caronissi bridge is also of interest because on its north façade there is a Venetian inscription and a lion in relief, which have been reported by Gerola.

Amanda Kelly plans to continue the fieldwork in 2020. 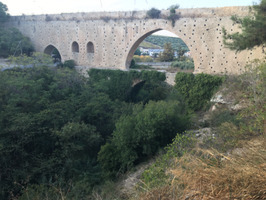 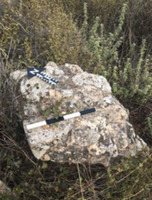 Fig. 2/ Fragment of masonry from the Roman predecessor to the syphon bridge at Spilia 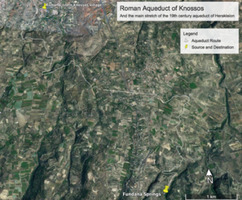 Fig. 3/ The project area with start and finish points in yellow pins