Mt Lykaion. Anna Karapanagiotou (Ephorate of Antiquities of Arkadia), David Gilman Romano (ASCSA / Arizona) and Mary E. Voyatzis (ASCSA / Arizona) report on the fourth of a five-year series of excavation seasons for the Mt. Lykaion Excavation and Survey Project, from June 13 to July 31, 2019.

During the summer of 2019 the team resumed excavation work in the Sanctuary of Zeus, both at the altar of Zeus at the southern peak of the mountain (1382 m asl), and also in the mountain meadow, 200 m lower in elevation.

The excavation of the last three years continued close to the centre of the altar of Zeus, where a great deal of Final Neolithic, Early, Middle and Late Bronze Age and Early Iron Age pottery was uncovered. The team continued their work to expose the southern end of the ‘architectural foundation’ at the summit of the southern peak, which appears to have been a major focus of the activity. To the east of the long north-south trench dug 2007-2010 the team dug an area in which was found a huge concentration of EH and MH coarse ware pottery. The Greek Ephoreia worked nearby, expanding one of Kourouniotis’ trenches from the early 20th century.

In the lower mountain meadow, site of the lower sanctuary, the team continued work in the area of the western end of the stoa, where the team dug between the back wall and the retaining wall of the building, discovering a passageway that must have been used for maintenance of the building. The team continued to clear the Ionic Building that is located immediately to the west of the stoa and have now exposed all four sides as well as the interior of the building. The team have been working to define the exterior and to clear the interior of the building of rubble. In the 30 m long stone corridor, extending from the eastern wall of the administrative building towards the north, the team cleared a 4 m section in the middle of the corridor finding a good deal of Hellenistic pottery, roof tile fragments and animal bone. To the north of the north end of the corridor the team dug a trench to clear the northeast corner of the arch and its foundations, which include a long series of blocks that lead towards the arch from the north. In the space between the stoa, the fountain and the administrative building, the team continued excavating a deep trench looking for what may be the Sanctuary of Pan, described by Pausanias. The team extended this excavation to the south and found a well-built stone wall. In a deep level in the center of the trench the team found a few sherds of Red Figure pottery. The team expanded the trench in the interior of the administrative building, where the team continued to look for the floor surface and the levels of use. A north-south interior wall of the structure was discovered and partially excavated. The Greek Ephoreia team continued to clear the area of the Agno Fountain and excavated several trenches in the area. In addition, the Ephoreia worked in the area of the Greek bath, to the northeast of the hippodrome, exposing a mosaic floor and excavating around the reservoir. The pedestrian surface survey that was initiated in 2018 was continued in the area of Ano Karyes and also in an area to the east of the Lower Sanctuary. 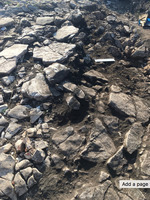 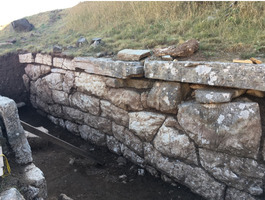 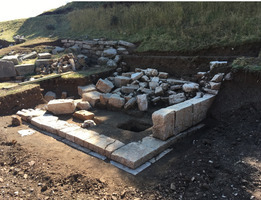 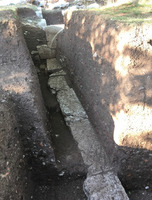 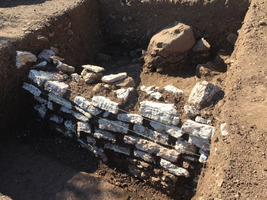 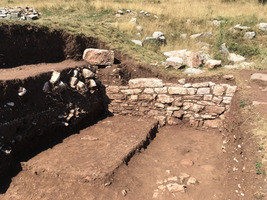