Corinth. Christopher A. Pfaff (ASCSA) reports on the 2019 excavations at Ancient Corinth.

Excavations in the Northeast of Theater Area

In the northern part of the area, a portion of the top surface of the east-west road (decumanus) was revealed directly to the west of the section of the road excavated in 2018 (Fig. 1). The newly exposed portion of the road, like that unearthed previously, was flanked on the south by a robbing trench, which may mark the line of a colonnade that lined the street in late antiquity. Excavation to the south of this robbing trench, in an area that may have served as a sidewalk, brought to light an additional stretch of the built drain (Drain 1) discovered in 2018 (Fig. 2). This drain, which went out of use in late antiquity, runs the full length of the excavated area along a slightly wavering course with a slight downward inclination to the west. The newly revealed portion of Drain 1 is generally lacking its tile lining but is otherwise well preserved. A much smaller built drain (Drain 4) was discovered to the south of Drain 1 (Fig. 2); this drain, of which only a small segment is preserved, must have served as a conduit for channeling water into Drain 1 from a source to the south.

In 2018, portions of the floors of three rooms of a large Roman building (perhaps a domus) were discovered south of Drain 1, and in 2019, an additional portion of one of these floors (in Room 1) was revealed (Fig. 3). This floor, whose design and technique is related to those of some early Roman floors in Italy and elsewhere, has a surface layer of black stone chips set in mortar and ornamented with a white tessellated trellis pattern studded with diamond-shaped tiles of white marble. A small section of another floor with an undecorated black stone chip surface was also uncovered further south, and it presumably represents a fourth room of the same Roman building. The walls of this building continue to be illusive. Only deep robbing trenches with fill predominantly of the 6th or 7th century A.D. provide indirect evidence for the foundations. Although attempts were made to locate the west end of this Roman building, the only evidence found so far for the west wall – a north-south trench (robbing trench 7) – is not entirely conclusive.

It has become increasingly clear from the evidence derived from the 2019 season that the Roman building associated with the decorated floors was succeeded in late antiquity by a multi-room structure, now represented by several short sections of walls built of rubble and tile set in lime mortar (walls 3, 5, 10, and 13 in Fig. 1). Prior to the construction of this late antique building, portions of the floors of the earlier Roman building were dug through in places to a considerable depth, and the resulting irregular pits were refilled with earth. Finds in this earth fill included broken pieces of the earlier floors and pottery dating as late as the 6th, or possibly 7th, century A.D. One portion of this fill, which underlay wall 13 of the late antique building, yielded the season’s most surprising find, a gold finger-ring with a magical gem of yellow jasper bearing an intaglio of the sign for the constellation Cancer and three accompanying “texts,” including ΙΑΩ, the Greek transliteration of the Hebrew name for God, Yahweh (Fig. 4).

A well (2019-1) was discovered in close proximity to the late antique building, and it appears to be contemporary with that building (Fig. 1 and Fig. 5). The upper part of the well-shaft had been provided with a lining wall, though the topmost part of this had collapsed into the fill within the well. The lower part of the well, which was cut through bedrock for a depth of nearly seven meters, did not require a lining wall. The use-fill of the well, which was encountered at about the level at which water began to flow into the well as it was being excavated, included a complete lamp of Samian type (Fig. 6) and a number of large fragments and complete specimens of table amphoras, transport amphoras, and pitchers, which may have been used for drawing water (Fig. 7 and Fig. 8). This pottery and that from the upper fill of the well indicates that this well was both used and filled in during the late 6th or early 7th century A.D. The shaft of this well cut through an earlier east-west trench that had been carefully dug into the bedrock. It is not yet clear what purpose this feature served, but the fill in it, which is datable to late 4th century B.C., is the earliest deposit encountered so far in the area. The fill contained an abundant quantity of fragmentary pottery, much of it normal domestic fine, plain, and cooking wares, as well as a couple votive miniatures and a number of sherds of imported transport amphoras, including several Punic amphoras, probably manufactured in Sicily (Fig. 9). These amphoras provide valuable evidence for a continuation or resumption of Punic trade connections more than a century after the destruction of the so-call Punic Amphora Building, excavated by C. K. Williams II in the area of Corinth’s later forum.

Remains of a north-south road came to light just below the plow-zone over much of the area west of the long boundary wall (Wall 2) that was revealed in 2018. As noted in last year’s report, the lower layers of this road terminated against the west face of Wall 2, while the uppermost layer extended over a robbed out section of that wall, confirming that that road layer must post-date the wall’s destruction (Fig. 10). Pottery associated with this road does not provide a very precise date, but points generally to the late Byzantine or Frankish period.

An entirely unexpected discovery was made near the west edge of the excavated area in grid-squares 2C and 3C. Here a series of shallow pit graves were discovered just below the plow zone (Fig. 1 and Fig. 11). Four graves were excavated, while an additional six were identified but left undug since they extend well into the west balk. This cluster of graves clearly represents part of a late cemetery, but its exact date remains uncertain. There are no grave goods to aid in the dating of the individual burials, but small isolated sherds of the 12th century in the fill of the burial pits provide a terminus post quem. All of the excavated graves contained the inhumed remains of adults (probably three male and one female). The disposition of the bodies (each fully extended on its back with the head to the west) conforms to the normal practice for Christian burials at Corinth. There is no memory among the villagers for a cemetery here in modern times and no indication of a cemetery or church in this immediate area on two maps of Corinth produced between 1828 and 1833, so despite the shallowness of the burials, they may be earlier than one might expect. So far the only evidence for the existence of a church in the area consists of fragments of a marble mensa with a cross monogram (Fig. 12), a small piece of a gold glass tile, and a couple glass tesserae. These are all likely to be Early Byzantine and so must predate the burials by many centuries.

The latest significant feature revealed in the 2019 season is a rectangular structure, almost certainly a house, comprising two rooms side by side – a nearly square room (A) to the north and a longer rectangular room (B) to the south (Fig. 1). The walls, or rather the foundations for the walls, of this building are built with broken up pieces of poros and tiles set without lime mortar. Finds associated with this building include 19th century pottery and coins of the early Greek monarchy. The absence of later 19th century material suggests that this building was abandoned in the wake of the earthquake of 1858, which resulted in the general relocation of the local population to the new site of Corinth on the coast.

Fig. 1/ Plan of the East of Theatre excavations Fig. 3/ Floor of room 1 of the Roman building (domus?), view from the southwest 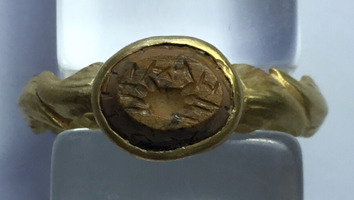 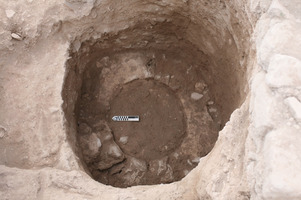 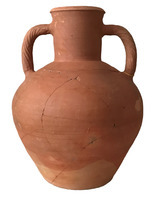 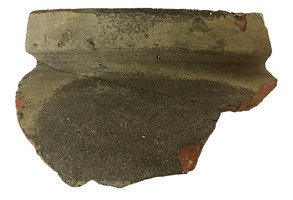 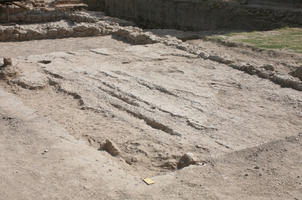 Fig. 10/ Section of north-south road in grid-square 7C, view from the southwest 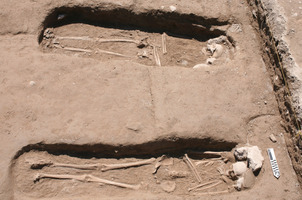