Athens, Ancient Agora. John Camp (ASCSA) reports on excavations carried out at the Athenian Agora between June 10th to August 2nd, 2019. There were four areas of excavation, as follows.

This section lies to the extreme southwest corner of the archaeological site and is part of the ‘industrial area’, originally explored by Rodney Young in the late 1940’s as part of an attempt to prepare the way for a site museum. He found so much material, of all periods (R. S. Young, “An Industrial District of Ancient Athens”, Hesperia 20, 1951, pp. 135-288), that the museum idea was abandoned, leading to the eventual reconstruction of the Stoa of Attalos.

The goal this year was to explore an area where deposits of terracotta figurines had been found, and to determine if the surrounding architecture represented actual workshops where the pieces were made or whether the material was brought in and simply discarded there. The plans of the buildings were clarified and it seems that the actual workshops should be sought elsewhere.

This area overlies the western half of the Stoa Poikile and generally has been brought down to about the floor levels of the Byzantine houses (10th/11th AD). Another pithos was discovered, and others were explored, their mouths lying at floor level. As is usually the case, they have collected a little fill and water but seem largely to have been emptied before being abandoned. Continuing down elsewhere, the team have now reached the bottoms of many of the Byzantine house walls and are within a few centimeters of the floor level of the Painted Stoa.

In this section the team continued to explore the area in front of the Painted Stoa; just south of the Eridanos river the team cleared the Roman basin set into the western corner of the enclosure defined by poros orthostates and tentatively identified as the Leokorion. The basin is 3.20 m. long and 2.15 m. wide, and between 1.00 and 1.30 m. deep. It makes use of both of the surviving orthostate walls of the enclosure as its southwest and northwest limits. The other two sides are built in their lower part of tiles, ca. 0.017 m. high, set into mortar that is ca. 0.005 m. thick between courses. The floor consists of a bedding of broken tile fragments covered by a thick layer of hard lime mortar pinkish/ red in color, deriving from the inclusion of ground-up terracotta, as recommended by Vitruvius (Book 2. 5. 1) in certain instances. Above the tiles, the northeast and southeast walls consist of reused marble blocks somewhat casually set.

The heavy mortaring suggests that the tank is hydraulic in function, as does its proximity to the river and its depth. With no evidence of any cover, it seems unlikely to have functioned as a cistern and one should probably imagine it served some industrial activity requiring a readily-available source of water from the adjacent river. Its bottom lies somewhat higher than the bed of the river; thus far the team have encountered no obvious signs of a drain or pipeline that would allow the tank to be emptied directly into the river.

The fill within the tank consisted of a layer of deep, fine, clean silt, as one might expect at the low point of a river valley. This was covered by a thicker layer of fill which included assorted animal bones and large chunks of pottery suggesting a date for the abandonment of the installation in the 3rd century AD. Two of the more complete pots (BΘ 331 and 376) were found lying at exactly the same level (52.03 m.), presumably a time when there was a surface exposed long enough to receive them.

Among the objects found in the fill in the south half of the basin were three pieces of stone ele- ments of a roof. The pieces are made of a shelly limestone, thought to come from nearby Megara, with numerous fossilized shells embedded in it. Its main attraction as a building material is its light weight compared to its volume. One piece consists of part of an eaves tile with a carved cover tile coming down to the edge, and a second piece is part of a sima decorated with a cyma recta profile, presumably the raking sima above a pediment. The scale is relatively small and it remains to be determined whether there are elements of a roof from a building or a monument. It is also not yet clear if there were terracotta elements higher up the roof or if it was made entirely of stone.

Last year along the south side of the enclosure wall there were exposed two squared limestone blocks set end-to-end and clamped with a double-T clamp. More excavation this season suggests that it is part of a substantial building or monument. The blocks rest on at least two courses of masonry, the upper one 0. 295 m. thick, and the lower one, of very soft poros, 0.45 m. thick. These founda- tions project eastward beyond the limits of the two blocks. Excavations are right at the limits of the scarp, and the exact relationship of the temenos wall and this new monument is unclear. It seems to fall in the line of the temenos south wall and it remains to be seen if it precedes the temenos, or was inserted into the temenos wall.

North of the tank the team uncovered a piece of worked marble in the form of a bench or seat turning a right angle. It would seem to be part of an exedra, a common type of Hellenistic dedication which takes the form of a monument in the shape of a hemicycle or the Greek letter PI. Designed to carry several statues, it usually had a seat at its base where passers-by could rest. This is a common type of Hellenistic dedication and is found especially in agoras (e.g. Priene) and sanctuaries (De- los). The presence of one here is in keeping with our expectation that the area in front of the stoa will continue to produce important commemorative and honorary monuments.

In this northern area the team continued to explore the lower layers under the floors of the Classical Commercial Building. Excavations uncovered pockets of early pottery (Mycenaean, Geometric, and Archaic), but no recognizable tombs, though there may still be one or two lurking there. The uneven ground, later walls, and eventually the water table made further exploration too cumbersome. The team did finish digging a well found and partially excavated several years ago (J 1: 12; 2015), set into and through the dromos of a Mycenaean chamber tomb (J 1: 11). Its diameter is 1.20 m. at the top, narrowing to 0.90 m.; the depth was measured at 5.10 m. The upper levels of fill in the well seemed to date to the 7th century BC, whereas lower down two or three largely complete vases suggested a period-of-use in the 2nd half of the 8th century BC. These included a coarse-ware hydria dec- orated with asymmetrical, light, wiggly incision around the neck, and a table amphora decorated with glazed bands.

Elsewhere in the section, the team began the removal of a Middle Byzantine wall in order to expose the west wall of the Classical Commercial Building and the roadway just to its west.

In the stoa a test program of epigraphical 3D recording and enhancement was begun, using RDI (Relative-Depth Imaging) photography and computer algorithms developed by Philip Sapirstein, assisted by Jeff Vanderpool. The results are essentially 3D squeezes useful for archiving purposes and for the promise that worn and abraded surfaces may be teased into revealing more letters, presently hard or impossible to read, thereby improving the texts of many of our 7,500 inscriptions. 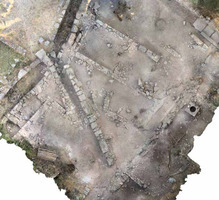 Fig. 1/ Aerial view of Section NN made with a drone 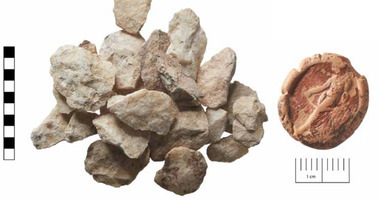 Fig. 2/ A large number of marble chips was uncovered this year perhaps indicating the presence of marble workshops in the area. bottom right: clay token with a classicizing Aphrodite 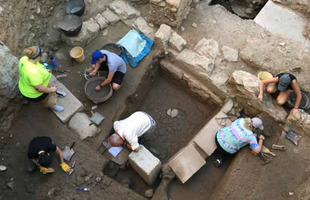 Fig. 5/ Excavating the Roman basin built just in front of the Painted Stoa 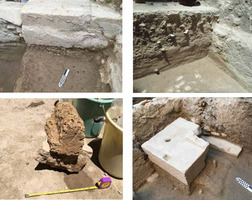 Fig. 6/ Clockwise from top: thick mortar on basin walls, sediment fill in the tank, corner marble seat or bench that may have been part of an exedra, stone elements of a roof