Askeli, property of M. Bitounis. Maria Giannopoulou (ΚΣΤ’ ΕΠΚΑ) reports on the discovery of architectural remains dating to the Roman period. At the S of the plot a 11m x 0.5m wall was found in the direction EW, which appears to be part of a late antique pottery workshop previously known.

Three further walls were found in the S of the plot, found beside pottery of the Late Roman period. 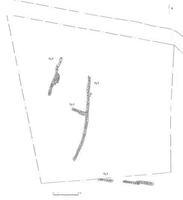