Megara, 28th October Street, O.T. 118, property of A. Basilaina. Andromache Katopodi (Γ ΕΠΚΑ) reports on the excavation of a bath (Fig. 1 and 2), whose construction dates to the Late Roman period. Part of the S section of the W sector were explored, and the W of a caldarium.

The masonry consisted of rough limestones, rectangular conglomerates, and bricks, laid with strong lime mortar. The floor of the caldarium was 1.77m below the surface, at which traces of burning were identified. Cylindrical brick discs measured 0.26-0.28m in diameter, and sat on top of rectangular blocks. The number of discs ranged from three to seven. The maximum height of the stacks was 0.38m. Four rectangular columns were also found on the floor, measuring 0.41 x 0.22m to 0.82 x 0.22m.

All of the bricks had been cut with fitting marks before fitting. A large amount of cobblestone fragments and some sherds of the Late Roman period were found, as well as pieces of tegulae mammatae. 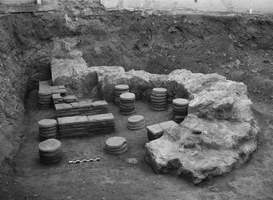