Excavation began in summer 2018 on a previously unexcavated field northeast of the Palace of Nestor. Several years before, the Ministry of Culture of Greece had, on the project’s behalf, begun legal procedures to expropriate the field, still in private hands. Carl Blegen, who, along with Konstantinos Kourouniotis, discovered the Palace of Nestor in 1939, in the 1950s had requested permission to explore the field, but its owner did not allow him to do so. Blegen did, however, succeed in excavating a large tholos tomb cut into the edge of that field, which he called Tholos Tomb IV.

Three years after the discovery of the grave of the Griffin Warrior, in 2018, expropriation of the field was at last concluded and excavation could begin. In cleaning the site the team immediately noticed a concentration of stones in the northeastern part of the field, and also, closer to Tholos Tomb IV, several large blocks with what appeared to be a hollow beneath them. With this observation in mind, excavation trenches were established throughout the field, but also over these special features. By late May 2018 it had become clear what had been identified were burials, in this case two monumental beehive-shaped tombs that we have called Tholos Tomb VI and VII.

The dromoi of Tholos Tomb VI and VII, which were excavated in 2019, lie parallel to that of Blegen’s Tholos Tomb IV, and it now seems clear that here, along the road that led from the acropolis of the Palace of Nestor toward the town of Chora, Trifylia, had been situated the most important cemetery associated with the settlement at the time when the Mycenaean civilization was first taking shape on the Greek mainland at the time of the transition between the Middle and Late Bronze Age.

In the case of Tholos VI the space within the thalamos is enormous, ca. 12 m. in diameter and its walls preserved to a height of ca. 4.5 m. above the floor of the tomb. It contained, according to rough estimates ca. 1000 cubic meters of earth and rocks, the later fallen in various phases as the dome of the tomb had collapsed. There is, however, important stratigraphy within this deposit. There has been isolated a phase during which the upper part of the thalamos was inhabited in Archaic-Classical times and, at a lower elevation, there appears to have been a Dark Age presence. The team hopes to unravel the post-Bronze Age history of this tomb in a detailed manner, and a key element for this endeavor is high-end photogrammetric documentation coupled with detailed spatial mapping in the project GIS.

Tholos VII is considerably smaller, only ca. 8.5 m. in diameter and its walls are preserved only to a height of ca. 2 m. In terms of their masonry the walls of both tombs are similarly constructed of unworked stones. The dromoi of both tombs are earthen. A peculiar feature of Tholos VI, however, remains unexplained. In the northeastern and southeastern parts of the thalamos there were ashlar blocks resting on the floor of the tomb, so close to the walls that they cannot have fallen into the tomb from above. At this point it is thought that these blocks were brought here from the acropolis of the Palace of Nestor, salvaged from buildings previously destroyed.

The floors of the thalamoi of both tombs have now been exposed, and finds from each have been removed. The chronology of the new tombs, in relation to earlier discoveries seems clear. Blegen’s Tholos Tomb IV appears to have been the first constructed and perhaps served as a magnet for later graves. Anyone passing through the gateway in the fortification wall that surrounded the acropolis at the start of the Late Bronze Age would have confronted it straight ahead. Both new tholos tombs and the grave of the Griffin Warrior were, however, built later, in the 15th century B.C., in the phase we call Late Helladic IIA.

Among the most exciting finds has been a new gold ring, depicting two bovids flanked by stalks of barley, as identified by Tania Valamoti of the University of Thessaloniki, and a golden pendant depicting the head of the Egyptian goddess Hathor. Its discovery is particularly interesting in light of the role that she played in Egypt as one concerned with welfare of the dead. 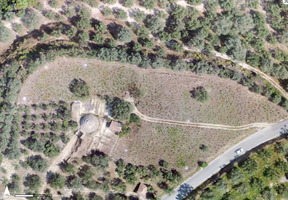 Fig. 1/ Aerial photograph of the site, before excavation

Fig. 2/ Map of the site in relation to the Palace of Nestor 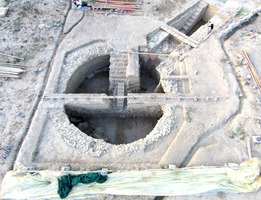 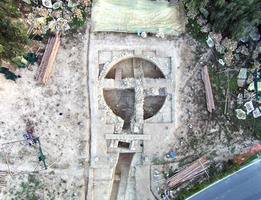 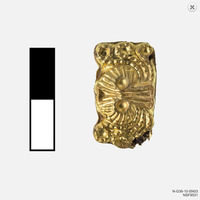 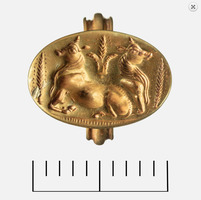 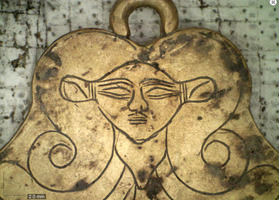