Key-words
Residence - Tools/weapons - Painting - Dress and personal ornament - Architectural revetments - Metal - Glass - Domestic space - Building Type - Find Type - Material Type - Site Type
Type of Operation
Excavation - Rescue excavation
Institution
Ministry of Culture (Θ' ΕΠΚΑ)
Toponym
Thebes, Thèbes, Thivai, Theben (de), Thebae, Thiva, Thebai
Linked Record
2008
Report
Thebes. V. Aravantinos (Director, Θ' ΕΠΚΑ) and I. Fappas (Thebes Museum) report on a rescue excavation in the S part of the anc. acropolis.
Earlier excavations in this sector had brought to light a large Myc building complex (Fig. 1) with floors of square bricks and fragments of wall-painting depicting a female procession. From July 2008 to January 2009, excavation at 3 Eurydike Street revealed a structure with a thick destruction layer of the M13th Ct, containing roof beams and cover tiles, many of which were found intact (and weighing between 8.5kg and 9.5kg each). This roof is estimated to have weighed at least 4 tons, and covered impressive, if poorly preserved, architectural remains, probably part of the Myc palatial complex (Fig. 2). Two especially large and well-built walls with door jambs, built in the Myc style of large roughly worked boulders with smaller stones wedged between them, form a central area, which contained fragments of frescoes. In the centre of the floor was a large bath tub with an impression on its base of a burnt basket which had been positioned next to it at the time of the destruction of the building. N of this central area was a rectangular open corridor, and a large covered area. From inside this room came much broken pottery, small glass beads with depictions in relief, burned fragments of painted wall-plaster, a steatite seal with a depiction of a horse and a gold attachment shaped like a flower petal. A spacious rectangular room excavated further N completes the plan of the building. Numerous drinking vessels (kylikes and cups) were found, along with a bronze dagger with gold rivet heads. However, the most important find was a 6-sided clay plaque (Fig. 3) with two holes for hanging, decorated with fish, possibly dolphin or tuna, on all 6 sides. A similar object (Fig. 4) was found in the previous excavation, along with an impressive dagger handle and a fragment of a bronze dagger with gold rivet heads on the clay floor of the neighbouring room. This also carried decoration on all four long sides, which are decorated alternately with a palm and chequered pattern. The building was destroyed by fire in the M13thCt BC. The data from both this and earlier excavations on the top of the citadel show that the region was at this time a fairly luxurious and densely populated neighbourhood of Myc Thebes.
Author
Catherine MORGAN
Bibliographic reference(s)
Unpublished field report, V. Aravantinos. Aravantinos, V., Phappas, I., Νέο μυκηναϊκό ανακτορικό κτήριο στην ακρόπολη των Θηβών (Καδμεία), ΑΕΣΘΕ 3 (2009) [2012], 929-943. AD 65 (2010), B1, 954-956.
Date of creation
2010-03-10 00:00:00
Last modification
2018-08-22 09:24:31
Picture(s) Fig. 1/ Fig. 1. Thebes: plan of the rescue excavations of the Mycenaean building complex. 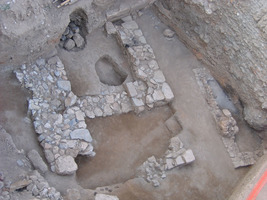 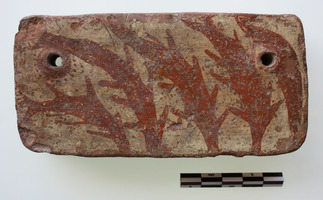 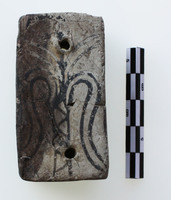