Key-words
Residence - Tools/weapons - Metal - Domestic space - Building Type - Find Type - Material Type - Site Type
Type of Operation
Excavation - Research excavation
Institution
American School of Classical Studies at Athens
Toponym
Korinthos, Corinth
Linked Record
20002006200720082008 (1)20092010
Report
Anc. Corinth. G. Sanders (ASCSA) reports on continued excavation in the area S of the South Stoa where H. Robinson had revealed a complex of Med and post-Med houses in the early 1960s (Fig. 1).
Work concentrated on 7 rooms and the courtyard of a Byz house, in which successive beaten earth floors were removed to expose the foundation trenches of the original walls (Fig. 2). The house consists of 9 rooms and a central courtyard. Two rooms flank a corridor leading from the entrance on Lechaion Road South to the court. The remainder flank the courtyard. The complex was supplied with water from a well in the court. On the S side of the courtyard, a stair ascended to a veranda and upper storey over the SE 3 rooms. The house was built in the 2nd half of the 11th Ct and remained occupied for 2 centuries. In the 13th Ct, the W range of rooms was assimilated into a property standing to the W, while the E part of the house continued in independent use. Three spaces produced significant metal finds (Fig. 3). The SW room, a semi-basement, had an assemblage of Fr tools including a scythe, a knife, an axe-hammer and a spear point. Beneath the stair ascending to the 2nd storey were a Byz ladle or lamp, an adze-hammer and a keyhole plaque. Outside and to the NW was a dump of iron door fittings, including parts of lock mechanisms and keyhole plaques.
The house provides a valuable complement to the Fr complex excavated by C.K. Williams S of the museum in the 1990s and has parallels in the upper strata of the Stoa Poikile in the Athenian Agora. The Med house will be conserved and will remain exposed as an example of a Byz domicile at Corinth.
Author
Catherine MORGAN
Bibliographic reference(s)
Unpublished field report, American School of Classical Studies at Athens (G. Sanders)
Date of creation
2010-03-10 00:00:00
Last modification
2018-08-22 09:24:30
Picture(s) 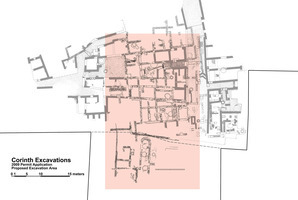 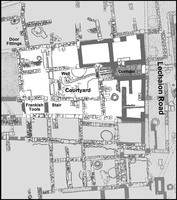 Fig. 3/ Fig. 3. Corinth, Byzantine house: Frankish tools from the southwest room, and lock mechanisms and keyhole plaques from the dump outside.