Key-words
Cemetery - Tomb - Figurine - Tools/weapons - Metal - Bone
Type of Operation
Excavation - Research excavation
Institution
Ephoreia of the Corinthia; Nemea Center for Classical Archaeology
Toponym
Aidonia, Botsika (JO206/1927)
Linked Record
2009201720182019
Report
Nemea, Aidonia. Two new unrobbed chamber tombs dating to the Late Mycenaean, palatial period (c. 1400-1200 BC) were uncovered during the systematic programme of investigation of the EfA Korinthia in the Mycenaean cemetery of Aidonia Nemeas. The first, whose roof was intact, contained 2 primary burials and repositioned bones from a further 14 individuals. The second tomb did not preserve its roof, which showed collapses already within the Mycenaean period, within and above which were identified 3 primary burials.

Both chamber tombs produced clay vessels and figurines, as well as small finds, such as buttons. These finds are consistent with the offerings in tombs of the early Mycenaean period (c. 1600-1400 BC) investigated in previous years at Aidonia, and included tableware and storage vessels, weapons and prestige items. The 2 new, unplundered Mycenaean chamber tombs at Aidonia open the way to the understanding of the development of the site through time and its links with the palatial systems of the neighbouring areas, especially Mycenae.

Aidonia, which lies in the NW foothills of the wine region of modern Nemea, historical Flyasia, was a significant centre in the region in the Mycenaean period (c. 1700-1100 BC). Aidonia became known after extensive looting of the Mycenaean cemetery, probably in the winter of 1976-77. A rescue excavation by the Archaeological Service (1978-80; 1986) under the direction of K. Krystalli-Votsi and the supervision of K. Kaza, brought to light 20 Mycenaean tombs, the majority chamber tombs arranged in one basic group. Fig. 1/ Aidonia: aerial photograph showing the dromos and chamber of the 2 new unplundered tombs in the E part of the Mycenaean cemetery, as well as tombs from the previous excavation. 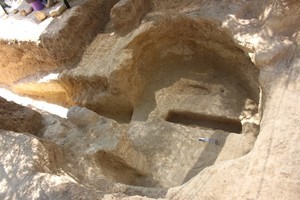 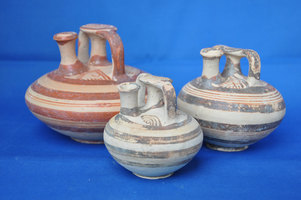 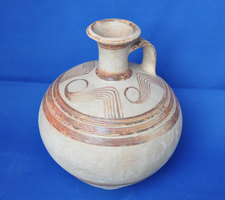