Sparta, Ancient Acropolis of Sparta (Byzantine Church at the ‘Circular Building’). Angeliki Mexia (5th EBA) reports on further excavations of the church, on the south slope of the acropolis hill, that was built in contact with the western end of the retaining wall of the so-called ‘circular building’ and whose contour was mostly revealed by Chr. Christou during excavations of that monument. In 2009 exploratory work was undertaken to completely reveal the church’s external outline and gather information regarding the way it was roofed and, by extension, its architectural form. The structure is nearly square and its eastern face consists of three curved tangential apses (Figs 1-2).

Inside, a pilaster (παραστάδα) is formed between the apse of the main Sacred Bema and the prothesis, while another is formed further west on the same axis on the eastern face of a section of wall that apparently belongs to the western wall of the main church. Only remains of foundations of the respective configurations in the south are visible today. The main entrance was on the west between the sections of the wall and pilasters, while the presence of another door opening in the same wall towards the north is documented. The floor was not identified since the 1964 excavations reached the foundations of the apses, but traces of mortar that remain attached to the northern part of the semi-dome of the middle apse may indicate its level. The pilasters on the eastern and western walls as well as the bed of foundations, probably circular in cross-section, that were revealed about the mid-length of the main church on the axis of the northern pilasters, do not help clarify the church’s architectural type, leaving open at present the monument’s classification as a basilica or a vaulted church. The northern and southern walls of the main church continue westwards, but their limit has not been identified.

The walls thus far investigated can be reliably attributed to the church’s construction period. They consist of rubble walls, with fragments of bricks in the joints and plaster covering the contours of the stones. It seems, however, that the church was built on a spot with earlier building remains, some of which have been incorporated, while there is widespread use of ancient architectural remains in the walls. On the inner face of the northern wall there are faded traces of painted decoration.

During the excavation, ceramics, metallic objects, some fragments of marble architectural members, a few fragments of glass vases, two pieces of plaster with colour, and some bronze coins were gathered. Fig. 1/ Ancient Acropolis of Sparta. Byzantine church at the ‘circular building’: general view from the east. 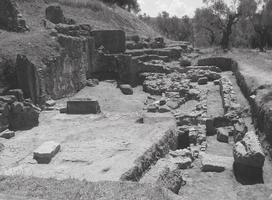 Fig. 2/ General view from the west.