Key-words
Public area - Public building - Hydraulic installation - Well - Numismatics - Bone - Stoa
Type of Operation
Excavation - Research excavation
Institution
ASA
Toponym
Sikyon (Kiato), Vassilika (usuel)
Linked Record
198719881988 (1)1994201320142014 (1)201520162017201820192020
Report
Ancient Sikyon. I. Lolos (ASA) reports on continued excavation of the well in front of the west stoa (Fig. 1). Excavation in 2018 extended the depth from 6m to 12m, leaving an undetermined extent still to be investigated. The investigation continued to produce mostly fragmentary ceramic vessels (Fig. 2), and food remains, including animal, bird and fish bones, as well as charcoal and architectural pieces. At around 10m depth, the ceramics date to the third quarter of the 1st century BC and the discontinuation of its original use and transformation into a rubbish dump was due to the collapse of parts of its lining, accompanied by covering of its water-bearing section and determining that is clearing would be dangerous. The pottery again belongs to the category of tableware – cups, plates, cookpots, bowls, Pompeian red-glazed pans and amphorae. Among the various discarded pieces were 55 coins. These coins appear to have been incorporated in the earth floors of taverns and restaurants and transferred to the well along with the functional ceramics.
Author
John BENNET
Bibliographic reference(s)
Ergon (2018), 22-23.
Date of creation
2019-08-11 13:19:03
Last modification
2019-08-11 16:58:22
Picture(s) 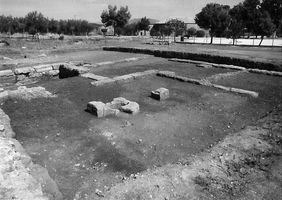 Fig. 1/ Ancient Sikyon: the well and the northernmost part of the west stoa, from the SW 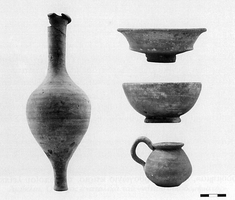