Excavations by Ioannis Petrocheilos documented the existence of a town there from at least the later Geometric (8th-7th c. BC) until the Early Roman period, and a major acropolis sanctuary (epigraphically attributed to Athena) dating from the 8th century BC to Hellenistic times. In 2017 the opportunity arose to reinforce and extend our understanding of the Paliokastro through intensive fieldwalking, geophysics and Unmanned Aerial Vehicle (‘drone’) survey. The project’s main objectives were (1) to investigate the entirety of the Paliokastro urban zone to refine our understanding of the main timelines of human activity; (2) to characterise better the changing spatial footprint of these activities; and (3) to situate this key area more systematically within wider island and regional research agendas set by KIP, the Antikythera Survey Project and excavations by Petrocheilos and others.

Surface survey covered 2.0 km2 and team members counted over 26,000 pot sherds and over 21,000 tiles, and collected 2,800 feature sherds and over 200 other finds (Fig. 2). Preliminary results afford an initial picture of the history of this small, but significant part of Kythera. Diagnostic Final Neolithic to Early Bronze I material comes mostly from the top of the hill, but definite material of EB2 to Minoan is strikingly absent there, suggesting that it was neither used as a peak sanctuary similar to nearby Agios Georgios, nor as a habitation (Fig. 3). This apparent gap of up to two millennia on the hill top also contrasts with lower areas in the valleys on all sides, which produced many small EB2 to Second Palace scatters (probably farmsteads) including at least three new examples in 2017. One rock-cut cavity was recorded, probably a Minoan single-chamber tomb, associated with a nearby farmstead-size scatter.

Paliokastro follows a wider pattern, particularly clear on Crete and the Cyclades, of the appearance of very late Late Bronze Age refuge sites following abandonment or decline of lowland centres and likely seaborne raiding. There is probable continuity of slow settlement growth from perhaps 1200-1000 BC through the Geometric and Archaic periods, when settlement was strongly nucleated on the Paliokastro (Fig. 4). Then expansion and growth during the Classical-Hellenistic (Fig. 5), and stability or decline afterwards until as late as 50-100 AD (Fig. 6). The earlier pottery associated with this scenario continues the Second and Third Palace potting traditions, but at some point within the Archaic period a new tradition emerged, marking the abandonment of micaceous pottery production. Pottery, including pithoi and larger and smaller plain vessels, were made with Neogene clays, most potentially at workshops near Paliokastro.

Historical sources document Kythera’s importance and refer to the city’s walls. Exploration in 2017 suggests it is possible that the southern area – clearly part of the city in Classical, Hellenistic and Roman times – lay outside the Archaic settlement proper given the presence of 7th-century BC burials (which one might expect to be extra-mural). At some point during the Classical period, there is a possible reinforcing of the NW part of the hill. Here, and on the far south-east side of the town, the fortifications are well preserved and UAV survey enabled the team to create photogrammetric images of areas inaccessible to fieldwalkers (Fig. 7). Different areas of the Classical town exhibit a different character in their surface assemblages. The main changes are the increased evidence for investment in higher status buildings on the lower southern slopes of the hill evidenced by finds of rosso antico, Parian marble, pebble-mosaic floors, and fine ware pottery mostly of Hellenistic-early Roman date), as well as very reduced evidence for settlement on the top ridge running south-east from the Athena temple on the acropolis.

Geophysical data already confirm and develop previous suggestions, by Petrocheilos and Tsaravopoulos and colleagues, of an area of large public buildings very close to the surface on the southern side of the hill (Fig. 8). Gradiometer survey in Area 4 detected the lines of a substantial rectangular building or enclosure (at least 30m x 15m) (Fig. 9). On another large terrace (Area 6), a series of clear positive linear anomalies of substantial thickness was detected, that seems likely to represent robbed-out wall footings. 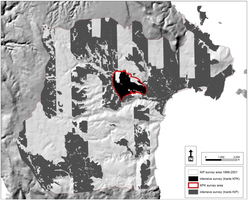 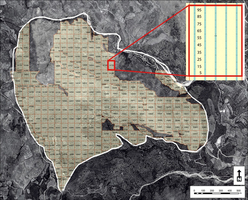 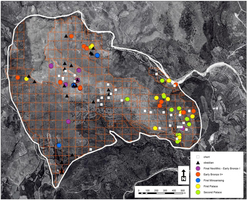 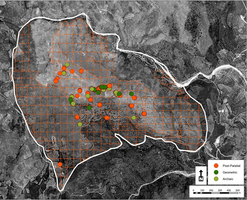 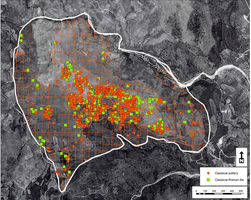 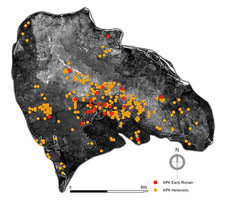 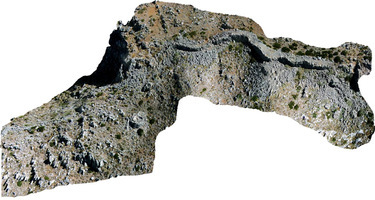 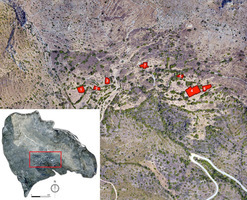 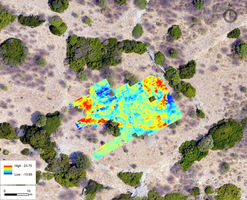