Koutroulou Magoula. Nina Kyparissi-Apostolika (Director Emerita, EPSNE) and Yannis Hamilakis (Brown/BSA) report on the third year of a second five-year programme of collaborative work at this Middle Neolithic site in Thessaly with the aims of refining our understanding of intra-site organisation, including indoor and outdoor spaces, and of the extent and nature of human involvement from the Neolithic to the present. In 2017 excavation not only continued on the top of the tell, but also extended to the slope and surrounding ditches revealed by earlier geophysical survey (Fig. 1).

Excavation in Z2 (7x6 m) (Fig 2) confirmed this as an area of rich building and other activity in the Neolithic, which at different times included roofed and open spaces of various natures, as well as features such as pits where large quantities of artefacts and ecofacts had been accumulated. To add to this complicated picture, the area had been disturbed by various anthropogenic and non-anthropogenic processes, which led to the decision to remove the baulk between trenches H1/H2 and Z1/Z2, thus fully exposing the walls of Building 1. Among the features to be noted is a series of post-holes (interspersed with animal burrows) in the SE part of the trench, perhaps indicating a light apsidal structure. Further, the building detected at the NW edge of Z2 in 2015 was excavated further: more of the underfloor deposit was revealed in 2017 but it was clear that this building had been partially destroyed/truncated by other activity, most probably modern construction of an agricultural road. However, in exploring the deeper strata in this area and the area immediately to the S, a series of other features were revealed, including a possible apsidal alignment of small flat stones which may define a platform/working area, and further to the S and slightly deeper, a concentration of small, rounded stones which may indicate an under-floor deposit from another building. In addition, in the SW area of this trench several layers of what appear to be successive clay floors interrupted by fills of soil were detected, recalling the pattern found in the central and south-central part of the trench in 2015. Work in this area demonstrates that building activity and arrangement and rearrangement of space was an ongoing and extremely dynamic process.

Trench Ξ15 (Fig. 3), on the eastern slope, revealed rich and extensive activity, including complete ceramic vessels (rare on the site), a concentration of quern stones (Fig. 4), and a possible hearth (Fig. 5). Excavation in Trench X16 confirmed the existence of a ditch, although its exact depth and width are still to be determined (Fig. 6). There was also evidence of maintenance of the ditch in the form of a recut. Trench Ψ21, however, opened to investigate a large rectangular geophysical signature in the southeast corner of the tell, revealed no signs of a structure. 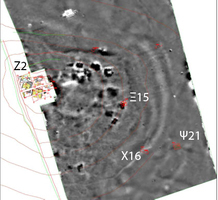 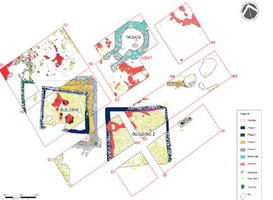 Fig. 2/ Koutroulou Magoula 2017: plan of the main excavated area (on top of the magoula) at the end of the 2017 season, not including peripheral trenches. 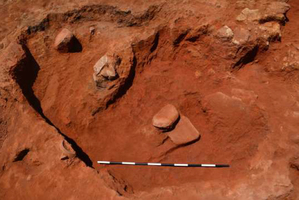 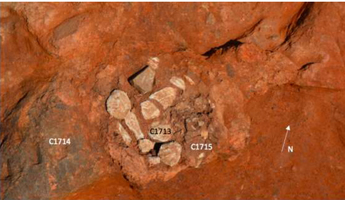 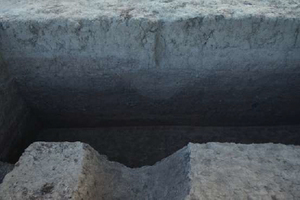 Fig. 6/ Koutroulou Magoula 2017: Trench X16 from the south, showing evidence of the ditch and its recut in the section.