Seven trenches were opened in 2017 on Dhaskalio and eleven in the northwest part of Keros (Fig. 1), where excavation focused on Polygon 4, just north of Kavos, a location of potential metalworking, complementing that already noted on Kavos promontory. Copper spills were found in several trenches, and in trench 7 a tuyère was found, indicating some metalworking activity. None of the trenches yielded direct evidence for smelting or casting.

On Dhaskalio excavation continued in five trenches opened last year and three new trenches (Fig 2). Two of these new trenches (E and N) were placed to reveal contexts of Dhaskalio Phase A – the earliest phase of occupation. Most successful was Trench N, from which no pottery indicative of the later Phases B or C has yet been recovered. The trench is divided in two by a substantial terrace wall, below which a fine wall of imported Naxos marble is potentially significant, since there is no clear evidence that the import of marble from Naxos pre-dated Phase B. A tiny schematic figurine was found here (Fig. 3). Nearby Trench E investigated a substantial entranceway to the upper part of the site. It also produced a bone seal ring bearing a sophisticated design with an exact parallel at Lefkandi on Euboia (CMS V 423) (Fig. 4).

Excavation continued in Trench A, the largest on the island (25m x 9m), now divided into three zones (Fig. 5). The northernmost includes large walls built around bedrock forming part of the system of walls on the north end of the island (also investigated in nearby Trenches B and C). The middle zone seems to be a passageway or street, while to the south, a block of buildings constructed on several terraces includes an area of burnt destruction and metalworking activity. The Trench dates so far entirely to Phase B and offers a unique opportunity to understand differing patterns of occupation in a single phase over a large area. A marble bowl fragment found here is of a type not found in the Cycladic cemeteries (Fig. 6).

Just above the sea, on the northeast part of the island, Trench H in 2016 revealed an entranceway to the site from the causeway to nearby Kavos with a stairway and drain. The drain was excavated in 2017 and samples taken for palaeoparasitology to determine whether it was intended for sewage or clean water. In the two rooms to the south of the drain multiple floor levels were carefully excavated. The southernmost room had three pithoi and one smaller storage jar in situ on the floor, bedded in an earlier floor level (Fig. 7). Macroscopic fabric study from the previous excavation, suggests that two of the pithoi in a blue schist fabric come from Amorgos, one in a micaceous schist fabric probably from Ios, and the storage jar from Melos.

Abundant archaeobotanical remains include a variety of plant remains in carbonised form, predominantly pulses and fruits such as grape, olives, figs and almonds. At present, only Trench N indicates a Phase A assemblage, based on the absence of pottery belonging to the Kastri assemblage, in combination with the dominance of coarse open shapes. Tuyères and crucibles were also found implying that metallurgical activities took place here. Material in Trench F, on the other hand, can be dated to Phase C, including a one-handled cup belonging to the Kastri assemblage with an elaborate impressed and incised decorative motif at present without regional parallels (Fig. 8). 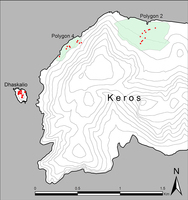 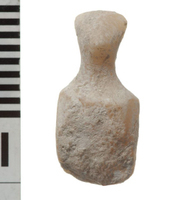 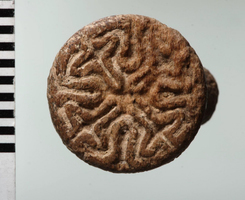 Fig. 5/ Keros-Dhaskalio 2017: photogrammetric view of Trench A (North at top). 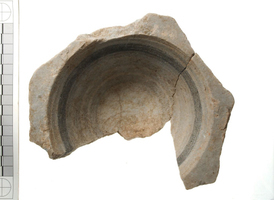