Koumasa. D. Panagiotopoulos (ASA) reports on excavation of tholos tomb B previously excavated by S. Xanthoudidis. Excavation continued with the removal of secondary burials, placed without order, which presented various degrees of burning and fragmentation and belonged to individuals of various ages.

The space W and SW of the tomb was also investigated, where a deposit of offerings had been found. Finds were many and interesting: about 110 beads of necklaces, 8 seals, among which was a Minoan scarab with linear decoration (Fig. 1), a silver ring, also with linear decoration, seals of hippopotamus ivory and local stone, a gold amulet in the form of a bull’s head (Fig. 2?), fragments of stone vessels, tools and blades of obsidian.

Outside tholos B a location was investigated where a quantity of vessels deliberately broken in Antiquity had been deposited and used in funerary rites. Nearby, in a level dated to Early Minoan IIA, a stone figurine was found.

Xanthoudidis had only incompletely investigated the fill between building Gamma and tomb A, as excavation in 2015 showed. This year a new layer of burials and vessel fragments of EM IIA date (Agios Onouphrios ware) was discovered.

On the basis of new finds, the excavator places the beginning of the use of the cemetery earlier than currently thought, the new data suggesting that the funerary deposit, tholos A and funerary building Gamma are earlier than tholoi B and E. 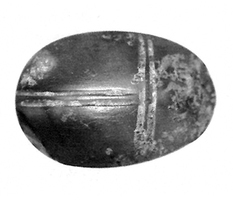 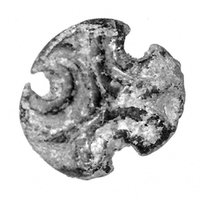