Zominthos. E. Sapouna Sakellaraki (ASA) reports on continuing excavation of the site (Figs 1-2). Two large entrances into its E side were revealed. The SE had a strong staircase, which had undergone destruction in Mycenaean and Roman times, demonstrated by a coin of Marcus Aurelius, but especially in the 1960s from illicit excavation. From the partially preserved steps of the staircase, it appears to have led to the building’s central court. The NW entrance had an ante-room with a bench and a paved floor (Fig. 3); this entrance led, via a long corridor, to the sanctuary with the stepped altar found previously.

An interior staircase was revealed in the W wing of the building which led from a room with columns on a lower level (Fig. 4). In an adjacent room, probably with 3 compartments, following the slope of the hill, was revealed the tallest wall found so far, reaching 3m. At various levels of this section there were found bronze daggers and knives, grinding stones, stone and clay vessels, as well as a sealstone with a lion decoration. Parallel with the upper level of the tripartite room in a room to the N, over 100 vessels were found and storage areas were revealed whose contents appear to have been robbed in the Mycenaean period. The large halls found this year gave support to the upper storeys with columns or pillars (Fig. 5). Their floors were either of light-coloured limestone or pebbled and, with the painted wall decoration, demonstrated luxury.

From the first storey came an amulet in the shape of a bivalve shell (αχιβάδα) (Fig. 6), according to the excavator an indication of cult and of the marine nature of the deity, also demonstrated by the quantity of inedible sea shells. Part of a vessel was found with decoration of a piglet, an animal later associated with the nourishment of Zeus in the Idean cave. (A LM I rhyton in the form of a pig was found in the 1980s in a cupboard in the N part of the building.)

There were numerous small finds, in addition to pottery: a bronze seal imitating a scarab, other bronze objects, knives, stone vessels (Fig. 6) and furniture inlays (of bone or rock crystal). The excavator believes that empty storage spaces indicate that they had been cleared by the inhabitants when they left, or looted by people in the Mycenaean or Roman periods.

Workshop spaces were also revealed, such as an ancillary room to the ceramic workshop, which had fragments of potter’s wheels, and another outside the main complex with a considerable number of beehive pieces, indicating bee-keeping. 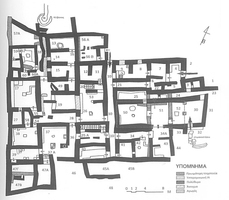 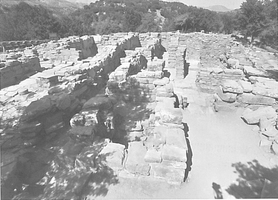 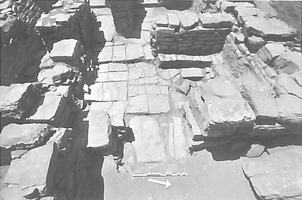 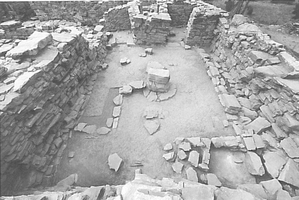