Key-words
Pipe/drain - Well - Residence - Wood - Hydraulic installation - Domestic space - Road system/waterway
Type of Operation
Excavation - Rescue excavation
Institution
Δ'ΕΠΚΑ
Toponym
Argos
Linked Record
2009
Report
Argos, Kyprou Street (Property of G. and P. Kontou). Eleni Sarri (Δ’ΕΠΚΑ)reports on the discovery of architectural remains belonging to two buildings of the 5th c. AD (Fig. 1). Located between these was a pebble paved road (1) of 9.65 m. in length and aligned on an E-W axis, which continued into adjacent properties. Its eastern section had been destroyed by the construction of a modern well. The upper surface of the road consisted of brown beaten earth in which there were large and small pebbles, tile fragments and particles of mortar. The underlying layer consisted of hard brown soil, stone rubble, large and small pebbles and tile fragments (Fig. 2).
Most of the excavated area was occupied by building A which consisted of three rooms (I-III) aligned on an E-W axis and continuing into adjacent properties. Rooms II and III were located along the southern side of a long colonnaded room (I), from where they were accessed via an opening with a stone doorsill. Another entrance with side pilasters was located in the western wall of room I. In the western section of the room’s northern wall was a tri-lobed window between three brick columns which had fallen into the northern area. Opposite the opening in the southern wall of the room was another which led to the courtyard of the colonnaded room, currently located under an adjacent property. Despite their fragmentary state, it would appear that the rooms of the building were laid out around a colonnaded courtyard following the style of classical houses.
Rooms II and III also communicated through an opening. In the middle of room III was a square construction (0.99×0.75×0.60 m.) made of small and large stone rubble, capped by a larger square block. In the middle of the western side of the structure was a cavity in which there was a vertical wooden roof beam. In the eastern part of the room I was a small rectangular room (IV) in which there was a brick bench.
Building A was preserved to a height of between 1.68-1.85 m., while the walls varied in width between 0.50-0.70 m. Built using the opus incertum mixtum style with many reused architectural elements such as unfluted columns; the foundations consisted of carefully worked stone blocks laid upon rubble. Excavations beneath the floors of the rooms revealed architectural remains attributed to earlier phases (Fig. 3).
To the south of road 1 was a second building (B) in which two construction phases were identified. The later phase (β’) was contemporary with building A. At this time the entrance to the building was from its northern side (the southern side of road 1) and was defined by two stone ‘benches’. A stone paved floor was also attributed to this phase. During the earlier phase (α’), the building was accessed through the same opening, but had a stone threshold upon which two different doors were set. One was single leaf and opened inwards, while the other was double leafed and opened outwards. The later phase (β’) was contemporary with another pebble paved road (2) which also underwent a number of changes. Along the southern side of the road was a water collection channel connected to a clay pipe (1) which ran under the floors of rooms I and III of building A. The second phase of road 2 alterations were associated with the Late Roman stone paved road which connected the ancient agora of Argos with Tiryns and Nafplion, which has also been identified during excavations in other properties.
Author
John BENNET
Bibliographic reference(s)
ADelt 64 (2009) Chr., 274-277.
Date of creation
2017-11-12 00:00:00
Last modification
2020-03-30 08:36:58
Picture(s) 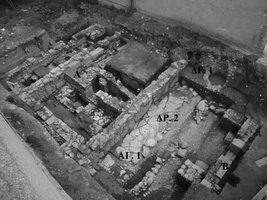 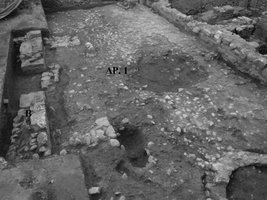 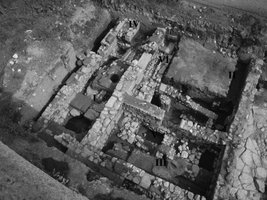