Key-words
Tomb - Bone - Stone
Type of Operation
Excavation - Rescue excavation
Institution
Δ' ΕΠΚΑ
Toponym
Argos
Linked Record
2008
Report
Argos, 105 Irakleous Street (Property of K. Theodoropoulou). Eleni Sarri (Δ' ΕΠΚΑ) reports on the discovery of building remains from the Late Classical to Early Hellenistic, Archaic, Late Helladic and Middle Helladic periods, as well as burials of the Late Helladic and Late Geometric (Figs. 1,2).
Building remains of the Late Classical/Early Hellenistic included two rooms (Ι, IV) in the western and eastern part of the area, foundations of walls in the south (22, 5, 7), a large wall (10) along the western side, along with four pits and three vothroi which were dug into Middle and Late Helladic layers. Tiles, stones, animal bones and pottery of the 4th to 3rd centuries BC were retrieved from the pits and vothroi. The layout of the architectural features points to the presence of an open space (atrium) between the two rooms.
Building remains including two walls (14, 15) attributed to the Archaic period were found in the northern part of the area, while in the south-west were two Late Geometric pot burials (I, III), one in a krater and the other in a pithos. Placement of the pithos had disturbed part of the stone-paved floor that formed the outer area of a Mycenaean building (Fig. 3), while a second building was also attributed to the same period.
Middle Helladic remains were present in the northern and eastern parts of the excavated area and included a possible retaining wall made of stone blocks (25). Also present was a Late Helladic IIAI [sic] infant burial in a cist grave, in which was also found a rounded alabastron.
Author
John BENNET
Bibliographic reference(s)
ADelt 63 (2008) Chr., 259-261.
Date of creation
2017-10-31 00:00:00
Last modification
2020-04-02 16:10:04
Picture(s) 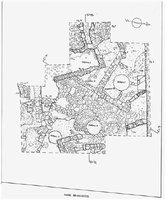 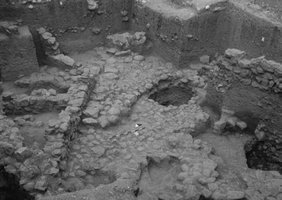