Key-words
Bath - Agricultural facility - Pipe/drain - Well - Figurine - Hearth/Kiln/Oven - Sculpture - Metal - Stone - Hydraulic installation - Public area - Production/extraction site - Road system/waterway
Type of Operation
Excavation - Rescue excavation
Institution
Δ' ΕΠΚΑ
Toponym
Argos
Linked Record
2007
Report
Argos, Gounari Street (O.T. 155, Property of N. Xixi). Christos Piteros (Δ΄ ΕΠΚΑ) reports on excavations undertaken in the eastern, central and northern part of the property, in which architectural remains, pottery and small finds dated from the Helladic to the post-Byzantine periods was found (Figs. 1, 2, 3). In the north-eastern part of the property was a square wine press dated to the post-Byzantine (Fig. 4). Built with stones it was lined externally with lime plaster and internally with hydraulic concrete (kourasani). To the west and east of the wine press were walls and the remains of various other features, including a pit dated to the Hellenistic.
An important feature in the property was a road, aligned on a SE-NW axis. With a recorded length of 19-20 m., it was in use during the Roman and Hellenistic periods. The road was associated with two pipes, a smaller one running along the northern edge and a larger more central one which was lined with fired clay bocks and covered with limestone slabs. This pipe was connected to a bath complex (valaneio) and functioned as a water conduit during the Roman period.
Hellenistic and Roman pottery was collected from the north-western side of the property, along with Early Geometric sherds and a Geometric skyphos, probably associated with a burial. In the west was a circular feature dated to the post–Byzantine period, probably a well.
In the south-east (Α-ΣΤ΄ 9.0-11.5) were architectural remains linked to industrial activity, including a workshop in which there was a partly preserved lime plastered floor and gully, along with iron slag associated with metal working (Fig. 6). In the same area was a marble head dated to the 2-3rd centuries AD, with the face heavily abraded, possibly as a result of having been used as a grinder (Fig. 5). To the north of this area was a poros foundation of a Hellenistic building, along with the torso of a male figurine (Fig. 7).
In area B-E /9.0-10.5 m. was a small pithos in grey sediments dated to the Middle Helladic (Fig 8), containing an infant burial and sealed with a Middle Helladic amphora made of grey clay (Fig 9). In the same area was an infant burial within a pear shaped Corinthian krater, sealed with a limestone slab. The krater was attributed to the Archaic period and had linear decoration on the shoulder, rim and one of the handles, while the inside was painted brown (Fig 10). Another Archaic krater was also found.
In area Ζ-Ι/8.50-9.50 m., the lower part of a kiln with an opening of clay bricks and small stones was found. The upper part had been destroyed by the construction of the Roman workshop with a limestone floor. The kiln was used for iron working and is dated to the Hellenistic period
In contrast to the eastern part of the property, there were very few important architectural remains in the west. This area was covered by a thick layer of grey soil and contained no building remains. According to the excavator it represents flooding by the nearby Xerias stream, which occurred during the late Roman period.
Author
John BENNET
Bibliographic reference(s)
ADelt 62 (2007) Chr., 278-282.
Date of creation
2017-10-31 00:00:00
Last modification
2020-04-02 16:18:50
Picture(s) 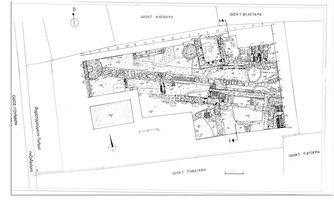 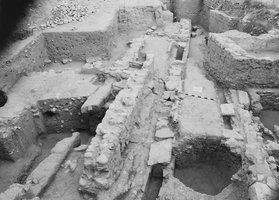 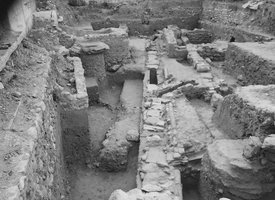 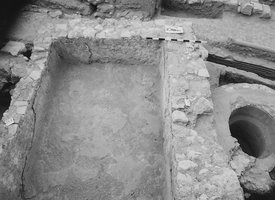 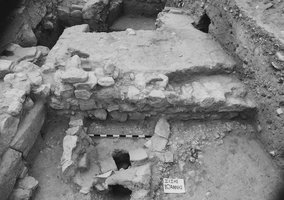 Fig. 6/ Argos, Gounari Street (O.T. 155, Property of N. Xixi): The excavations from the west showing the workshop and kiln. 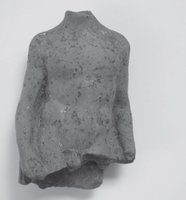 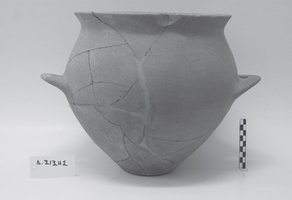