Key-words
Well - Tomb - Stoa - Figurine - Sculpture - Commercial area - Domestic space - Production/extraction site
Type of Operation
Excavation - Research excavation
Institution
ASCSA
Toponym
Agora antique, Athenian Agora
Linked Record
2006200720082008 (1)20092010201120122013201420152016201720182019
Report
Athens, Ancient Agora. John Camp (ASCSA) reports on continued excavation at the northwest corner of the agora square (Sections ΒΘ and ΒΖ), in and around the classical building identified as the Painted (Poikile) Stoa. Some additional work was done also near the southwest corner of the agora square (Section OO), just north of an area known to us as the 'Industrial District' (Figs. 1, 2, 3, 4).
In Beta Theta East they dug deep deposits of fill dating from the period of abandonment of this area between the 5th and 9th c. AD (Figs. 1, 2, 5). In several places they encountered large deposits of broken rooftiles which seem to have been brought from elsewhere and discarded there, outside the city walls. In this same Late Roman fill overlying the Eridanos river, they recovered a marble portrait head of a woman (Fig. 6). Largely on the basis of the hairstyle this is dated to the first half of the 2nd century AD. In Byzantine levels further west they uncovered the mouths of two more pithoi side by side. In Beta Theta West they continued the exploration of floor levels in various rooms (Figs. 1, 2, 7). In almost every room in this western area they found a hearth, a small deposit of coarse ware pottery, or pithoi, all of which suggest that this is a primarily domestic context.
In Beta Zeta (Fig. 3) they dug a layer that seems to be largely of the late 6th/early 5th BC, of the sort usually associated with the Persian sack of 480/479 or the clean-up thereafter. Fragments of high quality black-figured pieces, the head of a female terracotta figurine, and several fragmentary ostraka make up the assemblage. To the east they dug one of three wells identified in the past two years to its fully preserved depth of ca. 3.30 m. It dated to the years around 400 BC and was largely full of marble and poros working chips, suggesting the debris from a nearby masons' yard or workshop. Also in Beta Zeta north, they explored a large cutting which may be another collapsed Mycenaean tomb, the fourth or fifth in this area. Adjacent to this cutting/collapse, in Room 6 of the Classical Commercial Building, they exposed another stretch of polygonal wall, running east-west, which may be the northern limit of the original building. Just to the north and at a lower level, they excavated a layer full of late Geometric pottery, some with figures of horses and a frieze of painted birds. It is not clear if this represents a disturbed Geometric grave or pyre, or some later activity at the dromos of one of the adjacent Mycenaean chamber tombs.
In Section OO they continued to pursue the plans and functions of buildings lying just across the street and to the north of the 'prison' (Fig. 4). They found traces of modest houses/workshops with small installations: pots/basins set into floors, areas of waterproof flooring, traces of material suggesting industrial activity (signs of burning, pieces of pumice, traces of slag and other waste material). In a pit they found several mould fragments made of terracotta, used for casting a bronze statue and dating no later than the 5th century BC (Fig. 8). Elsewhere industrial debris seems to indicate ironworking and the manufacture of terracotta figurines (Fig. 9).
Author
Chryssanthi PAPADOPOULOU
Bibliographic reference(s)
Unpublished report, ASCSA
Date of creation
2017-07-25 00:00:00
Last modification
2020-02-17 11:22:45
Picture(s) 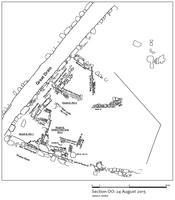 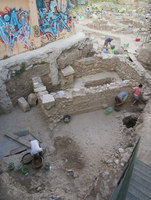 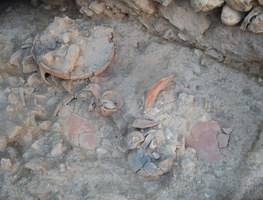