Key-words
Residence - Tools/weapons - Plant remains - Metal - Bone - Stone - Domestic space - Production/extraction site
Type of Operation
Excavation - Research excavation
Institution
British School at Athens
Toponym
Daskalio, Vrachonisida Skandia, Skalia
Linked Record
201620172018
Report
Keros-Dhaskalio. Colin Renfrew and Michael Boyd (Cambridge/BSA) report on a new programme of excavations on the small islet of Dhaskalio opposite Kavos on Keros in August – October 2016, which follow those of the recently published excavations of the Cambridge Keros Project (2006-2008). This year’s excavations constitute the second season of a projected four-year programme, of which the first (in 2015) was the Southeast Naxos Survey (as reported last year). The excavations of 2006-2008 had confirmed that Dhaskalio was a major settlement in the later part of the Early Bronze Age (EBA), its inception contemporary with the Special Deposits North and South at Kavos (with their abundant finds of broken marble sculptures and vessels). Seven excavation trenches were opened this year on Dhaskalio (Fig. 1) and eleven in the northwest part of Keros (Fig. 2), in the area designated ‘Polygon 2’ during the Keros Island Survey.

On Dhaskalio the structures investigated during the 2016 season could be assigned mainly to Phase B of the site sequence: this was clear in the large open-area excavation in Trench A, where several rooms and surfaces, as well as terrace walls, of that phase were revealed. A notable find was a small sealstone (Fig. 3), the first to be found on Dhaskalio; none has been found on Kavos. The structures of Trench F, immediately south of Trench VII of the 2007-2008 excavations, were securely dated by the accompanying pottery to Phase C. An interesting find here was a petroglyph (Fig. 4) apparently the first such to be discovered in a secure EBA context in the Cyclades There are also indications of Phase C material in Trench C at the northeast of the site.

The widespread occurrence of potsherds with traces of copper, indicative probably of local copper working, were supplemented by much more numerous indications in Trench L, on the eastern slope of the island, where a stone dagger mould, metallurgical ceramics and numerous copper fragments, as well as a floor surface with a burnt area revealing extremely high traces of metals after XRF analysis suggested casting procedures were undertaken in that location. Numerous fragments of lead, as well as the find of a small lead axe (Fig. 5), suggested the casting also of lead artefacts. Metalworking has been shown both in the previous excavations and in this year’s campaign to be a frequent component of routine occupation of spaces throughout Dhaskalio, but this year’s find may point to the presence of a workshop in this area. Portable XRF study of Dhaskalio revealed high readings of copper throughout and high readings of lead in the north part of the island, in contrast to much lower readings in Kavos, except on the Kavos promontory, where metalworking is known to have taken place.

At the east edge of the island, at a lower level, and only 5m above the sea, Trench H revealed a stairway and drain which was clearly an entrance to Dhaskalio, perhaps the main entrance from the causeway which in EBA times connected it with Kavos (Fig. 6). The notable stairway in Trench H documents a conspicuous entrance to the settlement and may find a counterpart at a higher level at the southern end of the major terrace wall excavated in 2008 to the south of Trench II, the same wall ending immediately to the north of this year’s Trench L, where it runs into the bedrock. Cleaning operations at the north end of the site have revealed more clearly the complexity of the wall structures in that area. The complex arrangement of walls running at a lower level east-west at the north end of the island was under investigation in Trench C and Trench SB at the end of the excavation season, and it is hoped that a clearer picture will emerge of these notable structures during the 2017 season. Ceramic studies are beginning to offer the impression that, while the summit was fully utilised in Phase C, much of the extensive building remains visible elsewhere on the site are of Phase B date, and, beyond the summit, it may be the case that not many areas were utilised in Phase C. The extent of habitation in Phase A remains to be confirmed.

The excavation trenches in Polygon 2 on Keros established clearly the EBA date of the field walls and other structures previously observed on the surface. Ceramic study indicated that the pottery could consistently be attributed to Phase A of the Dhaskalio ceramic sequence and the period of both Special Deposits at Kavos, establishing that these structures could be assigned to the Keros-Syros culture, rather than to the later (Kastri) phase of the Cycladic EBA. Only in two tests were there sherds of Phylakopi I and Grey Minyan indicating limited continuation into Dhaskalio Phase C, and perhaps beyond in some parts, confirming the finds of the survey. It is hoped that further investigations here will add to our understanding of the relationship between the sanctuary and settlement at Dhaskalio and its Keros hinterland.

The methodology adopted for the excavations of Dhaskalio and Keros combined worldwide best practice (‘open-area, single context’ excavation and digital recording) with specific experience of excavation in Greece and the Mediterranean. The open-area system envisages large open excavation trenches rather than small trenches, essential in order to understand how the settlement was spatially structured, while the single-context approach emphasises the recognition and interpretation of stratigraphy and the removal of strata in reverse order of their deposition. Crucial to this process was prompt recording and study of finds and ‘synchronisation’ of those data (especially for pottery) to field iPads; contexts were thus dated and basic information became available on a short timetable. Stratigraphic recording and control was achieved in three dimensions through the use of photogrammetry (Fig. 7) rather than traditional two-dimensional plans and sections, which were then generated from the photogrammetric record. Excavation data in 2016 were ‘born digital’: all data were captured digitally in the field and in the excavation laboratory, using iPads running the iDig system developed for the ASCSA excavations in the Athenian Agora. Data were synchronised daily across all iPads and uploaded to external backup and to the excavation database.

Environmental study involved flotation, revealing a wide range of materials, including plant remains (grapes, olives, legumes and grains), bones, pottery, beads and fish bones and otoliths. Animal bones, while few in number, were primarily sheep and goat with minor representation of pig. Samples were taken from many contexts for phytolith analysis, while pottery was sampled for residue analysis for both lipids and starch. The difficulty of properly identifying and excavating surfaces such as floors in the field was tackled through soil micromorphology, while all contexts were studied geochemically using hand-held XRF, a technique that proved invaluable in locating areas rich in metal-working evidence as well as in differentiating contexts.
Author
John BENNET
Bibliographic reference(s)
Unpublished field report, British School at Athens
Date of creation
2017-07-12 00:00:00
Last modification
2021-04-16 02:59:07
Picture(s) 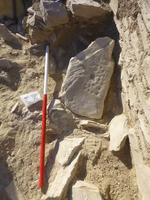 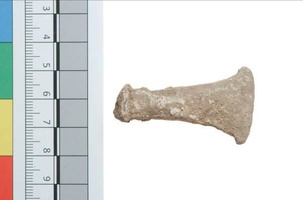 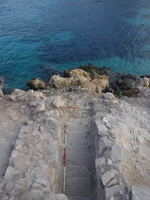