Key-words
Residence - Mosaic - Domestic space - Building Type - Find Type - Site Type
Type of Operation
Excavation - Research excavation
Institution
British School at Athens, Ephorate of Antiquities of Chalkidike
Toponym
Olynthos, Miriofiton
Linked Record
198719891992199419951997201420152016201720182019
Report
Olynthos. Bettina Tsigarida (Ephorate of Antiquities of Pella), Zosia Archibald (Liverpool/BSA), and Lisa Nevett (Michigan/BSA) report on the third season of this collaborative project which aims to build a holistic picture of Greek households within their urban and regional settings. Fieldwork was split over two seasons in April and July 2016 with four objectives: to excavate further house B ix 6 on the North Hill; to continue field survey beyond the fenced archaeological site to the south, north and west (i.e. the transition between the built-up area of the city and the countryside); to extend investigation to the South Hill, which is thought to be the core of the original settlement and is the least well-understood part of the city; and to create a new plan of the site in order to enable the data from Robinson’s trenches to be integrated more effectively with the results of the project’s geophysical survey, surface collection and excavation (Fig. 1).

The South Hill was the focus of the April season, during which geophysical survey (employing four different techniques) and surface collection were both carried out according to the same 30-m grid. Surface collection was then completed in July, when supplementary geophysical survey (using seismic wave technology) was undertaken and three small trial trenches were also excavated. Geophysical survey focused on the southern area of the hill, less extensively explored by Robinson. Tentative initial interpretation of the geophysics results suggest that this part of the hill was laid out in a somewhat regular fashion as a kind of grid, with parallel sets of curving east-west streets terminating at Robinson’s two north-south avenues and continuing beyond on an off-set alignment. In a few locations overlapping walls or differing alignments imply at least two different phases of occupation, but determining their chronology requires further investigation through excavation.

Surface collection provided a wider chronological range of material than recovered so far from any other area of the site: alongside typical pottery of the earlier fourth century BC, significant amounts of earlier material were recovered across the hill, both local and imported, such as handle fragments with high-standing knotted handles, sherds of a Chian chalice, a banded Ionian cup fragment and part of a copper-alloy fibula of Early Iron Age type (Fig. 2).

Three small test trenches were located to investigate various anomalies detected by geophysical survey. All three revealed that the upper deposits on the South Hill are deeper and more mixed than those on the North Hill, and evidence of fourth-century BC occupation, plus residual finds of sixth-century BC date, and possibly earlier. The overall results from exploration in 2016 on the South Hill will guide a strategy for larger scale excavation there planned for 2017.

The main aim of the excavation on the North Hill was to extend our knowledge of the organisation of space in the final phase of occupation of house B ix 6 by laying out eight new trenches (Fig. 3). These improved our knowledge of how the house articulated with its surroundings (through excavation of sections of the boundary walls); its layout (revealing the location of several new spaces, including a cobbled courtyard); the distribution of activities within (through the discovery of further well-preserved deposits of artefacts); and of the destruction of the superstructure (indicated by concentrations of collapsed roof-tile).

Excavation of trenches on the western and eastern boundaries of B ix 6 showed that the block within which the house sits was terraced into the hillside, the boundary walls between properties perhaps serving in places as terrace walls. In the northeast corner of adjacent house B ix 4 the corner of an andron was located with a well-preserved mortar platform and a non-representational black and white pebble mosaic. Part of the street facade at the south of house B ix 6 was faced with a row of narrow ashlar blocks, perhaps intended to enhance its appearance. A major feature of the organisation of internal space was a courtyard surfaced with large cobbles, with a linear edge, perhaps marking the transition to an area with a shed roof. A further roofed space was located in the northwest corner of the house to the north of the pastas and west of the oikos complex excavated in 2015; a terracotta installation found at the end of the season may be linked with food production or industrial processing. To the south of the west end of the pastas a further internal space yielded a number of ceramic vessels apparently crushed in situ as the house was destroyed. Two distinct strata here suggest the possibility that the upper storey extended over this area in addition to the north of the pastas (as suggested by excavation in 2015). As in previous seasons, no evidence was found this year of any kind of burned destruction; rather the project’s view remains that the house simply fell apart or was demolished.

This year, an area of 0.71 km2 – a total of 294 fields – was walked beyond the fenced area designating the boundary of the archaeological site (Fig. 4). As previously, very little material was identified as not being contemporary with the occupation of the North Hill. The few artefacts noted from other periods included Hellenistic and Late Roman amphora sherds and Byzantine glazed sherds. West of the North Hill high densities of material recorded within the first 100m outside the fence suggest there was settlement in this vicinity, while further west three or four very large tiles probably indicate graves. North of the North Hill the density of artefacts dropped off as the team moved northwards, as well as northeast and southwest. South of the South Hill one line of fields was covered, revealing low densities, perhaps a result of alluvial processes here; densities were greater at higher elevations to the east. East of the South Hill revisitation of an area located close to the so-called ‘theatre’ designated ‘unsurveyable’ in 2014 due to poor visibility revealed high concentrations of material after ploughing, including numerous pebbles from a mosaic presumably damaged through ploughing.

In July a 3-dimensional optical mapping project was completed, which was used to construct a preliminary digital elevation model (DEM) (Fig. 5), and is currently being used to prepare a new site plan, which will now form the basis for all of the project’s GIS models and will improve understanding of how new data relate to the structures investigated by Robinson. 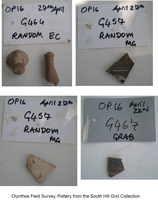 Fig. 2/ Olynthos 2016: a selection of ceramics from surface collection on the South Hill. 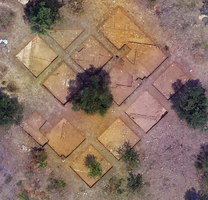 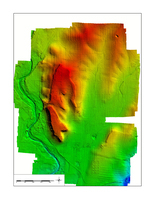 Fig. 5/ Olynthos 2016: newly constructed DEM of the site and surroundings.