The 2015 season was the first of five planned campaigns focused on investigating the lower town associated with the palace and the earlier history of the settlement (particularly the Middle Helladic period and the initial phases of the Late Helladic period). In the six weeks officially allotted to the project, trenches were opened near the edge of the acropolis, in an area between the Wine Magazine and the Northeast Gateway, and in a large olive grove between the Northeast Gateway and Tholos IV. These were designated as excavation areas A, B, C, and D (Fig.1).
Area A. Three trenches were opened here and a Middle Helladic dump that Blegen had located was also explored. The course and nature of the Early Mycenaean fortification wall traced by Blegen around the brow of the acropolis was also more precisely defined.

Area B.. In 1959 Marion Rawson dug two test trenches in a field owned by the Petropoulos family, located NW of the acropolis. Near that field we were successful in finding well-stratified Middle Helladic II levels with MH III-Early Mycenaean levels, but located no architectural remains. LH II surfaces with fairly complete pots resting on them were identified at higher elevations. Above these was slope wash seemingly deposited in LH IIIA1 (or later).

Area C. Excavations in Area C (Fig. 2) produced little: small trenches along the edge of the Demopoulos plot reached bedrock at a shallow depth and produced no finds. An exception was Trench N-C02 since, on the first day of excavation, we uncovered the corner of a stone built shaft. At a depth of about 1 m. below surface, bronze vessels and impressions of wooden planks were found, and it became clear that we had located a shaft grave (fig. 3). With permission of the Ministry of Culture & Sport excavation continued through October, in order to clear the finds from the grave (ca. 1500 individual objects), which contained the extended burial of a single man, ca. 30-35 years old at death. The body had been buried in a wooden coffin, set on an earthen floor at a depth of 1.50 m., within a stone-built chamber approximately 2 x 1.05 m. in extent. The bottom course of the chamber consisted of large ashlar blocks, perhaps repurposed from some earlier building on the acropolis.

Various grave offerings had been placed in and on top of the coffin and in the shaft around it. These included stone and metal beads, other jewellery, sealstones, carved ivories, metal vessels (gold, silver, and bronze), and bronze weapons (Fig. 4).

Area D. Exploratory excavations were initiated north of a fieldhouse built by Blegen from stones taken from the blocking wall of Tholos IV when it was disassembled in the 1950s by Lord William Taylour. The area was selected for excavation because of its proximity to the Demopoulos field. Two trenches were opened, both of which exposed LH III walls. The deposit was no deeper than 60 cm. above stereo.
Author
John BENNET
Bibliographic reference(s)
Unpublished field report, ASCSA (J. Davis – S. Stocker).
Date of creation
2016-08-31 00:00:00
Last modification
2018-08-22 09:24:48
Picture(s) 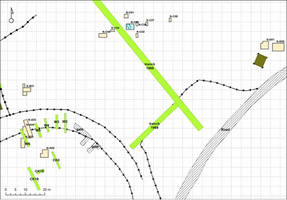 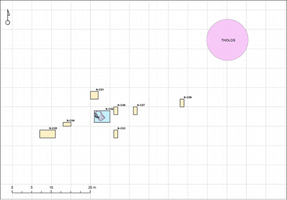 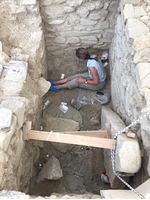 Fig. 3/ Pylos 2015, interior of the shaft grave with large fallen stone winched to one side. 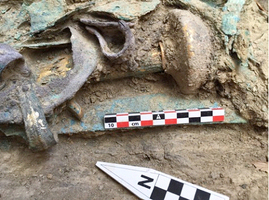 Fig. 4/ Pylos 2015, finds in the shaft grave, showing hilt and pommel of sword (resting on a bronze dagger) and silver cup with gold rim and handle on top.