In Area A (Figs 2-4), the upper W slope of the South Acropolis, the full extent of rooms A3100 and A2800 was revealed, as well as three more rooms to the N: A3200 (kitchen with oven) and A3300 (kitchen with hearth) on the upper of the two terraces; and A3500 (dining room) on the lower terrace. Excavation was completed of A3000 (originally excavated in 2004), a dining room situated below A2000; excavation began but was not completed in A3400, exploring the transition between the Communal Dining Building and the LM IIIC Bench Sanctuary (D600).
In 2015 it was demonstrated that the Communal Dining Building consisted of at least 19 rooms, covering an area of over 1000 m2, and forming the uppermost part of a civic complex that dominated the W slope of the hill. The pattern of intercommunication suggests that two or more dining halls had adjoining food processing and storage rooms, forming discrete clusters or suites within the building.

In the NE corner of trench A3300, and immediately north of the room’s N wall, an earlier (late 8th-early 7th c. BC) wall and clay floor were recovered, the NE corner of an earlier room that was abandoned and built over by the Archaic construction of room A3300. Among the contents of this narrow space was a deep round cup of late 8th century BC date, and a PG-B style krater, both almost complete.

Excavation in Area B, the lower SW terraces of the South Acropolis (Figs 5-8), investigated pre-Archaic (7th century) occupation levels beneath the cobble fill layer E of the Archaic spine wall B5003 as well as earlier structures contained by the fill beneath the lower N-S street. In B5300 and B5200, parts of two early 7th-century BC rooms were exposed, which appear to have been truncated by the spine wall and street construction; the rooms thus appear to form part of the same building. The E walls of this structure are well constructed and preserved across both rooms—they are some three courses high and use large dolomite boulders in the construction. Only about a meter or less of floor surface is preserved across both rooms; the pottery associated with these surfaces is 8th and early 7th century BC, thus indicating activities perhaps connected with the proto-Archaic Building to the northwest, and the J-shaped and semi-circular constructions and platform built over the tholos tomb.

In an effort to determine a terminus post quem for earlier 7th-century BC constructions on the site, and the proto-Archaic Building in particular, a series of sondages was conducted in B3800, recovering an earlier 7th-century BC floor surface that contained a number of stone tools (querns, grinders, and handstones) suggesting food processing. Adjacent rooms B4500 and B3700 seem to have had similar functions, probably related to provisioning feasts conducted in room B4100.

Excavation in B5400 and B5600 exposed a wide wall, some 8 m. long along the terrace (Figs 7-8). It was bordered on the W by a 3-m.-wide street, running in a N-S direction along the W side of the Southwest Building. The street was exposed for a distance of 15 m., ramping up from S to N, eventually stepping over or jogging around an early-phase cross wall at the north end of B5500.

South of B3500, a room about 3 m. square was recovered with a door opening on the S end, indicated by a threshold in the S wall. The E and S walls are preserved to only one course and the floor surface is extremely eroded. The room’s N wall, and thus the transition into B3500 does not survive.

A sondage within the northwest corner of trench B3400 revealed an earlier occupation surface, 0.30-0.50 m. below the level of the Archaic floor level, indicating the existence of an earlier 8th-7th century BC building underlying the hall in B3400.

In Area G, the SE area of the South Acropolis, the basic plan of South Building 2 was exposed in 2015 (Fig. 9): it consists of seven rooms across three relatively level terraces of the southeast slope. The South Building 2 is an impressive structure. The organization of space follows the general pattern of large urban houses at the site. Architecturally separate and spatially distinct storage rooms, food processing rooms, and halls are the norm for Archaic houses. Furthermore the architectural separation of kitchens from halls, normally by corridors, courtyards, or vestibules, is apparent in the South Building 2. Here food processing is relegated to the upper terrace in G600 and G900, and food storage to the middle terrace (G1500). The hall is spatially separate, accessible via the corridor and ramp from the exterior of the building and the storeroom in G1500. The arrangement emphasizes another characteristic of houses at the site, which is the proximity of storage to halls. While in most examples (Northeast Building; Northwest Building; and North Acropolis Building), the hall is directly connected to one storeroom, and generally controls or mediates access to pithos stores, the ramp and corridor in G1000 lead directly from the hall to controlled space, perhaps a courtyard or room in front of the east side of the G1500 storeroom, suggesting limited or controlled access.

In Area F, on the E slope, four exploratory trenches were dug with the aim of understanding the stratigraphy and preservation of settlement remains and the extent of erosion in this area. Unfortunately excavation in each trench exposed extremely eroded sub-surfaces. Exploration of the area will continue in 2016. 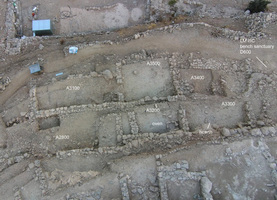 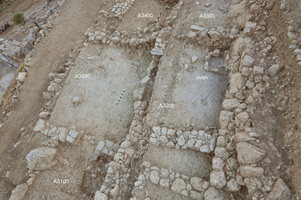 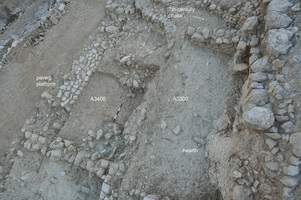 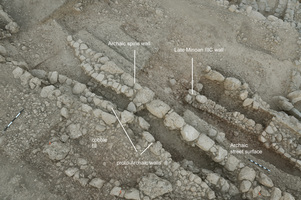 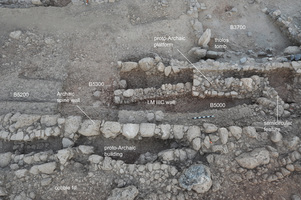 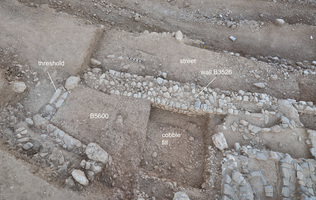 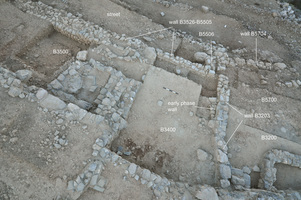 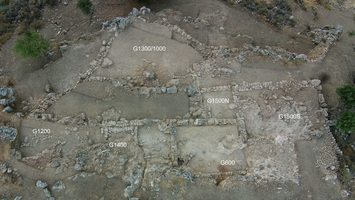