This year’s campaign showed that the earlier occupation of the site, underneath the 6th-century BC building, was already organized in a large complex. This early occupation combined open-air and roofed spaces. Largely excavated this year, it is located underneath the 6th-century BC complex and extends to the S, further beyond the southern limits of the excavations. The early plan brought to light consists of two courts and a large rectangular room (Fig. 1, room 2) with a hearth (Fig. 1, J) in the northern sector, while in the S were a roofed room on the East (subdivided into two rooms at a later stage), an enclosed space (roofed or open air?) with benches (?) on the W, on either side of a large central court with a hearth (Fig. 1, K). This large southern sector was abandoned when the 6th-century BC complex was erected in the north sector but was re-occupied in the Classical period when several parts of the 6th-century BC building were also re-used for ritual purposes. The plan of this early (7th century BC?) phase precedes the spatial organization of the 6th-century BC building. The nature of this early occupation is not yet clear. The associated material still needs to be studied but there were a significant number of loomweights, a large broken pithos and large drinking cup among the ceramic finds.

The excavators observe that the conscious material continuation between the 7th and 6th century BC phases in the northern part of the zone was clearly confirmed by the 2015 fieldwork. The latter showed that several rooms and walls of the 6th-century BC complex were clearly founded or rebuilt on earlier structures. It is, however, still impossible to say if some of these early (7th-century BC?) spaces were roofed or open-air. This reverence for the past was further suggested by the discovery of two large, most probably funerary, pits, located underneath the 6th-century BC levels of the complex (Fig. 1, A & F). One was found next to an enclosure wall that was in use both during the 6th and 7th-century centuries BC, which also limited the large 6th- century BC court to the W (fig. 1, A). The other was located next to the W wall of the rectangular SW room of the 6th-century BC (Fig. 1, F). It predates this Archaic occupation but was dug inside an already existing (open-air?) space of a similar plan. A contemporary paved floor, poorly preserved, was built around both pits. The pit found in the SW rectangular room further yielded a burnt jug (Fig. 2), that was deposited, in a later stage, after the pit was emptied and filled with cleaned earth. The vase, preserved until the neck, initially had a stone lid. The latter was found inside the vessel along with remains of olive leaves and residual bone fragments on the surface.

Long-term activity in the area was confirmed by few residual layers left on the rock in the west court which might predate the Proto-Archaic and Archaic levels (precise dates still to be confirmed). The nature of this early phase also needs to be further defined through the study of the associated material. Two study campaigns are planned (2016 and 2017) to focus on the 6th-century BC building and its material assemblage in order to understand better its chronology and use and prepare its publication. 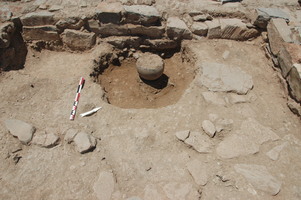