Other than one sherd from Complex B, all Prehistoric pottery was recovered from the area later occupied by Complex A. Two foci of Prehistoric activity occur in the north, centred on the Ploughed Field and Peripheral Areas 3 and 7, with another within Peripheral Area 6 towards the south. The material is rarely closely dateable, but suggests continuation of occupation from Early-Late Helladic into the Early Iron Age, at least in part of the area of the Ploughed Field. In the west, sherds from a single, probably Middle Helladic vessel were found on unquarried bedrock. The Ploughed Field, which yielded approximately 40% of the 2013 pottery finds, correspondingly contained the largest concentration and chronological range of Prehistoric sherds, spanning Early Helladic to transitional Early Iron Age.

A near complete hiatus follows until the Archaic-Classical transition, when activity resumed within widely separate areas. Early activity in Peripheral Area 6 rapidly expanded and spread also into Peripheral Area 5, in both areas continuing through Hellenistic into Roman times. On the quarried ridge, activity centred on survey square A6.13 again continued apparently uninterrupted. The largest of these concentrations include bulk storage vessels, tile, cookware and finewares, suggesting substantial installations. Further work is required to map vessel types, assemblages and function and thence assess the nature of localised activities, but it is already clear that activity in the area was not confined to quarrying. The concentration of late-Archaic/Classical pottery in the centre of Quarry Complex A apparently did not continue into the Hellenistic and includes cookware and a pithos, possibly related to quarrying.

The area of Complex A was used most extensively during the Hellenistic and especially the Roman period, with activity peaking during Early-Middle Roman times (Fig. 2). The assemblage is broadly consistent with domestic activity, with shapes for cooking, serving, transport and dining all represented. The cooking-related assemblage looks broadly Corinthian, with fragments of interior-flanged chytrai and lopades, lids, baking trays and wide-mouthed pitchers in cooking fabric noted throughout. Imported cooking vessels (e.g. Pompeiian Red Ware pan fragments) may indicating a change in dining practice within some areas of the site. Thin-walled cups in local/regional and non-local fabrics are relatively common: the identifiable Early Roman varieties can be connected with a later 1st-century AD disk base type from Corinth. A domestic suite of lekane, mortarium and basin forms with outward projecting grooved rims, also align closely with the ceramic repertoire from Early Roman Corinth. Amphorae were common throughout Complex A. While most were likely Hellenistic, the Early Roman period is represented by Dressel 1, Rhodian, and Kos types, a North African Early Roman 2, Southern Italian wall sherds (likely Dressel 2-4), a Dressel 23 and a Sikyonian Aii, thus indicating the area’s wide connections. A striking difference with Complex B is the prevalence of finewares. Imported Early Roman Eastern Sigillata A, Italian Sigillata (e.g. Conspectus Form 23, a chalice, and hemispherical bowls with parallels in the Athenian Agora), as well as local/regional sigillata vessels were found throughout the survey area. A rare find was an Early Roman lead-glazed cup with relief decoration. A few Early Roman fluked lamp nozzles suggest that Broneer Type 16 was likely the most common form.

By the Middle Roman (2nd-4th-century AD), the ceramic assemblage across Complexes A and B appear more closely aligned. Imported finewares are less prominent and jugs, cups and amphorae more common. Cookware jugs with vertical, triple-grooved handles and flat trefoil mouths were the most common serving vessels. In comparison to the Early Roman assemblage, there are very few securely Middle Roman cook pots: identified examples comprise several fragments of large everted rim stewpots, cooking vessels with exterior flanges, and a casserole/lopas in local/regional cooking fabric. The main drinking vessels were again thin-walled cups, which were found across much of the survey area. The majority of the identifiable types appear in a local/regional grey fabric, have flaring rims, and appear to be of 3rd-century date. Imported Middle Roman finewares, while few in comparison with Early Roman, include Eastern Sigillata B1, Çandarlı bowls (e.g. Hayes Form 3 and Hayes 2008, no. 801), and African Red Slip (with several examples of Hayes Form 27). Utilitarian vessels such as lekanes and coarse kraters were found throughout, with Middle Roman examples again closely paralleled at Corinth. Imported Middle Roman amphorae come from North Africa (e.g. Riley 1979, D221, D322, D312), the Black Sea (Zeest type 80) and the Aegean (Niederbieber type 77; Carthage Late Roman Amphora 3). There were many rims, grooved handles and bulbous necks of the local/regional wine amphorae recorded at Isthmia, Corinth, Sikyon, the Athenian agora, and Knossos. A few fragments of Broneer Type XXVII and/or Type XXVIII lamps were identified. The utilitarian nature of much of the Middle Roman assemblage may suggest quarrying activity during this period.

Late Roman (4th-7th-century AD) pottery is found only in pockets within Complex A. There is a sharp rise in imported finewares and amphorae, as well as significant numbers of large cooking pots. The most common vessel type, found in clusters, was the Late Roman Amphora 2 in Southern Argolid fabric, local fabric and others of uncertain origin. Sixth-century cooking vessels with semi-cylindrical rims in a dark, hard gritty fabric were also common. Imported include African Red Slip bowls (Hayes Forms 99, 104 and 105), Phocean Ware bowls (Hayes Forms 3 and 10) and Ephesian amphorae (Carthage Late Roman Amphora 3). Broneer Type 32 lamps were also present. Three securely identified (plus four possible) body sherds of survival versions of the LR Amphora 2 type indicate continuity of activity in the northern quarry area (Peripheral Areas 2 and 3) and south (Peripheral Area 5) into the 8th-century. These could be contemporary with some of the latest finewares (ARS Form 104/5).

The 9th to 11th centuries are barely visible in the ceramic record. Two body fragments of Günsenin 1 amphorae (from the Ganos area of the Dardanelles in the 10th and 11th centuries) found at the north end of the quarried ridge demonstrate imports from the Constantinople area. Two handle fragments found in Peripheral Area 5 are from a type of water jar produced in Athens which occurs in large quantities in the Agora in the 9th-13th centuries. Two 12th-century glazed sherds with Fine Sgraffito decoration, and three 13th-century sherds with Incised Sgraffito and Champlévé decoration were also found in Peripheral Area 5. These are contemporary with four securely identified (and five further possible) sherds of Günsenin 3 amphorae, a type produced in the area of Chalkis in the 12th and 13th centuries which circulated widely in the Aegean, and found throughout Complex A.

Over 400 chipped stone artefacts were recovered during the 2013 field season (Fig. 3). These are predominantly reddish and brown flint, whose local provenance was confirmed by systematic field observation of the region surrounding the quarries in June 2015. The local flint sources thus identified include pebbles weathered from Pleistocene conglomerates and limestones, and Holocene sediments. Flint pebbles are available loose on the surface or are easily prised from weathered bedrock outcrops. Higher quality grey and yellow flints represented among the chipped stone artefacts are not found locally and thus appear to be imports. All stages of the production chain are represented: unworked pebbles, cores, tools and working flakes, indicating local production. The tools include a technologically heterogeneous range of scrapers, notchers and borers. Obsidian represents only 3% of the lithics, a very low proportion incompatible with known Late Neolithic to Bronze Age assemblages from the wider region. One denticulated sickle element can be dated to the Middle Bronze Age. The flint tools have poor spatial correlation with the Prehistoric pottery. There is, however, considerable overlap with pottery related to quarrying and post-quarrying periods, dominated throughout by Roman material (omitted from the plan above 1 to show the earlier periods more clearly), suggesting the possibility of the use of lithic technology during historical periods.

The northern end of Complex A contains four concentrations of non-chipped stone lithic artefacts, comprising fragments of building materials and grinding stones, quartz and mica-schist hand tools, and slight evidence of metal-working. The significant quantity of marble flooring, together with some marble wall cladding and tesserae suggest relatively affluent Roman domestic structures, or potentially the re-use of these, or their materials in later buildings. Palaeotopographic reconstruction shows that quarrying extended across most of the Ploughed Field, and thus the buried structures may post-date stone extraction. Analysis of ceramics indicates that the activities associated with the four concentrations are likely of Roman age, although further work is required to assess the duration of occupation and whether associated with quarrying or post-quarrying activity. The lithic assemblage in association with roof tile suggests, in addition to dwellings, agricultural processing (basalt and andesite grinding stone fragments). The hand tools (mostly quartz, two of schist, plus reused pottery sherd polishers/rubbers) are possibly related to domestic or workshop activity. No conclusion is presently available concerning their purpose (possibly leather-working?), or whether they are linked by related activities. They do, however, appear to represent consistent types of working over the area.

The shell assemblage consists primarily of murex shells (13 Hexaplex trunculus and 3 Bolinus brandaris), mostly collected alive. Although often related to purple-dye production in archaeological contexts in Greece, here neither their numbers nor state of preservation suggests dye extraction. A punctual extraction cannot be ruled out, but the incorporation of these molluscs in the diet of local inhabitants and/or workmen seems more plausible. Other shell remains corroborate this hypothesis, namely the horn shells (Cerithium vulgatum), cockles (Acanthocardia sp. and Cerastoderma glaucum), scallop (Pecten jacobaeus) and whelk (Buccinulum corneum) found in limited quantities. The presence of holed individuals of murex, horn and whelk suggest extraction of the raw flesh raw with a pointed tool. The discard of empty shells into the fire seems to have been a common practice, suggested by several heavily burnt specimens from areas otherwise undamaged by fire. A non-dietary use of molluscs is indicated by other shells, namely water-worn, beach-collected thorny oysters (7 Spondylus gaederopus). This species is edible, but also provides a thick and robust shell which has been used in a variety of ways in the Aegean from prehistoric times onwards. Some of the Spondylus valves exhibit chopped edges or other rough modification. Their shape and size permits use as scoops or containers with minimal or no modification. Most of the specimens come from the Ploughed Field, where the existence of a denser concentration at the western end fits the hypothesis of domestic structures in this area advanced above. There is no distinction in the distribution of murex and spondylus. Isolated specimens are also found especially in the peripheral areas.
Author
John BENNET
Bibliographic reference(s)
Unpublished report, British School at Athens.
Date of creation
2016-08-29 00:00:00
Last modification
2018-08-22 09:24:48
Picture(s) 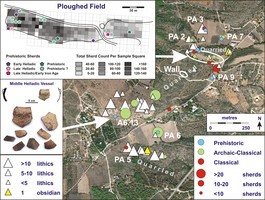 Fig. 1/ Kenchreai Quarries Project, distribution of Prehistoric-Classical sherds and chipped stone lithics within Complex A. Post-Classical material, which represents the majority of pottery from the area, is omitted in order to show more clearly the earlier material. PA = Peripheral Area.